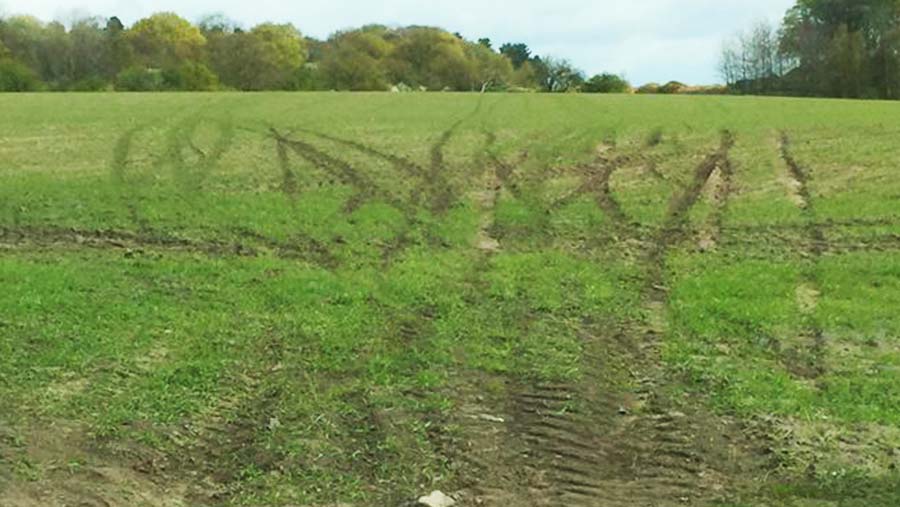 A brazen gang of quad and off-road bike riders has struck again, causing thousands of pounds worth of damage to crops.

Farmers filmed a group of 20 balaclava-clad quad bikers armed with an angle grinder, cut through steel fencing to gain access to a field.

The gang then unloaded quad bikes and scrambler bikes from white Transit-style vans and drove them across the middle of the field of spring barley, creating deep ruts and serious damage.

The incident happened on Sunday morning (24 April) in a field in Snape Lane, Harworth, near Doncaster, on the Nottinghamshire/South Yorkshire border. The video footage has been passed to police to review and use as evidence.

They are quite happy to tackle quad bikes and scramblers near dog walkers. But we ring police 100 times and we don’t get anything. We don’t understand why Witness to incident

The farmer who caught the gang in the act, who did not want to be named, alerted police about the incident, but was told nobody was available to send at that time.

“I rang the police on 101 and said: ‘They’re here right now and they are damaging someone’s property. I want someone to come out,’” said the farmer.

“I told police there were about 20 of them on quad bikes and asked them why they wouldn’t send someone. But the operator on the phone said: ‘We haven’t got anyone available.’”

In partnership with South Yorkshire Fire and Rescue Service and the local Neighbourhood Watch team, police issued warning notices to eight bikers who were “riding on the land without permission and causing a nuisance to local residents”.

However, the farmer accused police of ignoring crimes committed against farmers and landowners.

“They are quite happy to tackle quad bikes and scramblers near dog walkers. But we ring police 100 times and we don’t get anything. We don’t understand why.”

Another farmer said: “A field of wheat at T1 stage in a neighbouring field was also ridden across at the weekend, causing further damage.

“This just reiterates the point we’re making. There is recklessness going on in the area. It has been logged on 101, but there has been no follow-up again.”

A spokesman for Nottinghamshire Police said: “We are fully aware of the damage that quad bikes cause to crops and farmland and we sympathise entirely with our farmers and landowners.

“We have made real progress in dealing with rural crime in Nottinghamshire, which is one the police and crime commissioner’s top priorities, but quad bikes present some very particular challenges for us.

“It is difficult to pursue these bikes off road or effectively deploy devices such as stingers on this terrain. We have even mobilised the force helicopter in the past when quad bikers have been reported to us.

“The fact is that someone in the local community will know who these individuals are and where these bikes are stored and in large rural communities information from the public is invaluable.”