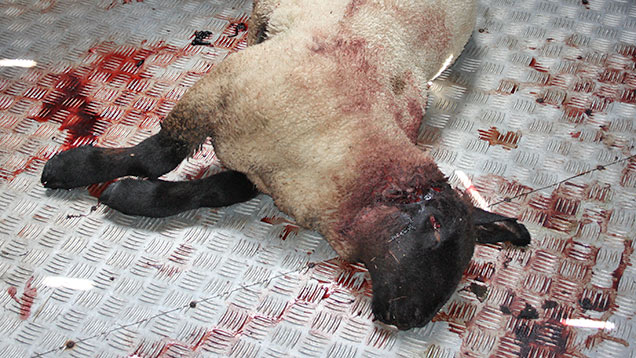 A distressed farmer has spoken out after attackers cut the ears off two of her pedigree Suffolk lambs, killing both animals.

Roberta McMullan said the shock of the attacks caused the animals to die from cardiac arrest at her farm in the Battleford Road area of County Armagh.

The two five-month-old lambs were killed in separate attacks, one on Saturday 9 May and the other a week earlier.

Ms McMullan said she had been left stunned as to why anyone would carry out such cruelty.

“I found one of the lambs on Saturday morning with its right ear cut off and the other a week prior to that. It was the vet who informed me the ears had been deliberately cut off.

“It’s crazy to think someone would do such a thing,” she said.

“The ram lamb killed was the best ram lamb I have. He was the top lamb, according to the recordings this year. And the ewe lamb was a decent one, too.

“Together with the vet fees I have lost around £1,000,” Ms McMullan added.

Local councillor Mealla Campbell said she was disgusted to learn about such a “heinous” act on young animals.

The councillor said: “I was disgusted to learn of this horrendous, sadistic attack on lambs.

“This is a heinous act and has been very disturbing for the farmer involved and indeed the whole community.”

The Police Service Northern Ireland (PSNI) said it had increased patrols in the area.

A PSNI spokesman in Armagh said: “We are presently investigating reports where a number of lambs have been attacked and have had their right ears cut off.

“Someone out there knows who is behind this act of animal cruelty. We have increased patrols in the area and our enquiries will continue.

And David Wilson from the Ulster Society for the Prevention of Cruelty to Animals (USPCA) added: “These were premeditated attacks. The person responsible has gone equipped and prepared to inflict suffering on young lambs.

“We have seen incidents like this before, thankfully rarely, but it is very difficult to understand the mindset of anyone who would deliberately harm an animal.”