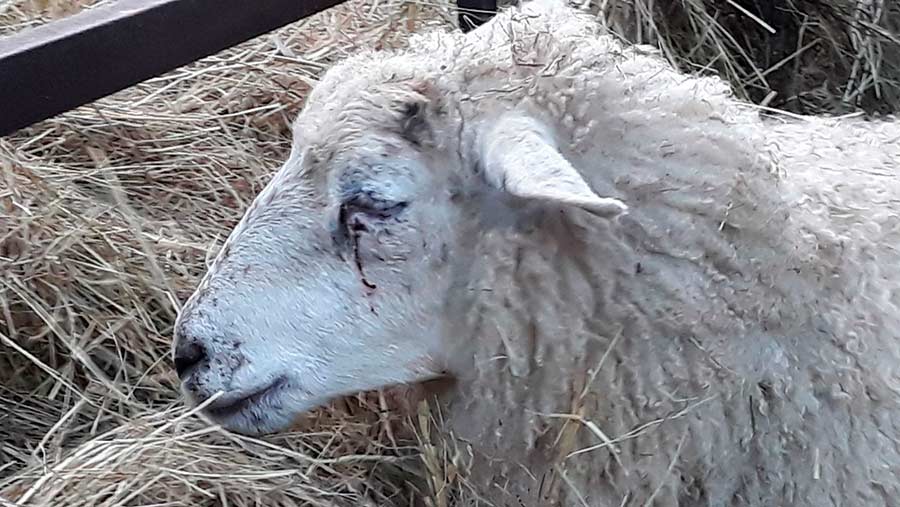 This sheep sustained injuries to its face

A ewe has aborted her lamb after a gang of teenagers attacked a flock with rocks, bricks, lumps of tarmac and a pitchfork.

Phillip de Jager, 41, works as a full-time farm employee in Kibworth, Leicestershire, and looks after his own flock in his free time at a site he shares with John Dixon. This isn’t the first time their farm has been targeted.

In May last year their lambing caravan was destroyed by an unknown culprit, who smashed the windows and damaged the inside. Silage bales were cut up, hay bales slashed and holes were pushed through the plastic roof sheeting.

Mr de Jager said: “It went quiet for a while, but when I went up to check on the sheep on 3 January I found rocks in the lambing shed and a sheep had an injury to its face. I realised people had been throwing rocks at these sheep. Bricks, lumps of tar and a pitchfork had also been thrown.

“Then on 5 January, between 3.30pm and 3.45pm, I went to feed the sheep and saw a youth walking away from the barn. Then a whole bunch of them, about eight, were running away from the field, so I went after them to take pictures.

The farm’s lambing caravan was vandalised

“In one of the pictures I put up on my Facebook page, a girl was recognised by a few people. She was about 14 years old. The police have been round to see her and her parents.”

Mr de Jager, who has been lambing at the site for four or five years, has already seen one sheep abort a lamb. He now faces a waiting game to see whether any more of his and Mr Dixon’s 170 sheep abort before they are due to lamb at the end of January.

He said: “I would like to show them a dead lamb or aborted lamb and say: ‘Hold this animal you have killed because of your actions’. I have lost my income for this lamb and I have had the ewe for a year, which has cost money. I would love it if they could fully understand the consequences of their actions.”

A Leicestershire police spokesman said: “Police received a recent report of items being thrown at a shed which contained sheep.

“Items found near the shed included bricks and tarmac. A number of sheep have been injured. Enquiries are ongoing.”