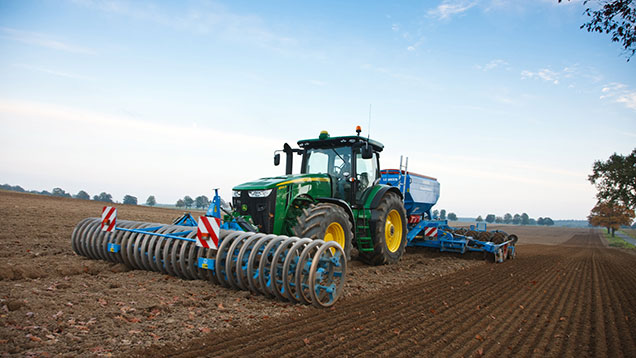 Thieves have stolen dozens of satellite navigation systems from tractors and farm vehicles in Norfolk.

One John Deere dealership in West Norfolk is aware of 30 GPS systems stolen from the area it covers. Each unit costs about £10,000 to replace.

It is believed the units can fetch about £5,000 on the black market, with many destined for Eastern European countries where they cannot easily be traced.

Norfolk police said theft of GPS systems was an increasing problem, with thieves targeting the external GPS receiver and the control panel inside the vehicle cab.

Police community support officer Phil Writer, based at Downham Market, said: “We want to raise awareness in the farming community that thieves are targeting these systems and ask them to be vigilant.”

The NFU said it was working with Norfolk police and John Deere to reduce the number of thefts.

Leaflets have been produced urging farmers to secure and remove components of the GPS system when leaving vehicles unattended.

“The key message for farmers is they should take these units out of tractors and other farm machinery each night.”
John Newton, NFU

NFU Norfolk adviser John Newton said: “The key message for farmers is they should take these units out of tractors and other farm machinery each night.

“Don’t leave them in a locked cab, as these can easily be broken into. We would also ask farmers to consider using property marking kits.

“These GPS systems are becoming as essential for farmers as car satnavs are for motorists, guiding tractors in fields and saving diesel, labour and time.

“Losing them can have a considerable impact on farm businesses.”

One victim was farmer Adrian Garrett from Wereham, near Downham Market.

“We have barriers and other security measures at the front of the farm and we know they didn’t come in that way,” said Mr Garrett.

“They must have come across fields at the back, walking about half a mile to get here.

“If we left a tractor in a field overnight we always took the system out, but we thought the vehicles would be safe in the yard. Now we know otherwise.”
Farmer Adrian Garrett

“If we left a tractor in a field overnight we always took the system out, but we thought the vehicles would be safe in the yard. Now we know otherwise.”

The systems were covered by insurance but took about a month to replace, leading to disruption for the farm, said Mr Garrett.

“We had to drill 150 acres of wheat without the satellite system and all the data we had stored was lost.”

“Losing these GPS systems can cause a lot of problems.

“Ultimately I would like to see manufacturers bringing in better security measures, such as deactivating a system as soon as it is reported stolen and a lock for the external GPS receiver.”

Anyone with any information should contact their local police station on 101 or call Crimestoppers anonymously on 0800 555 111.