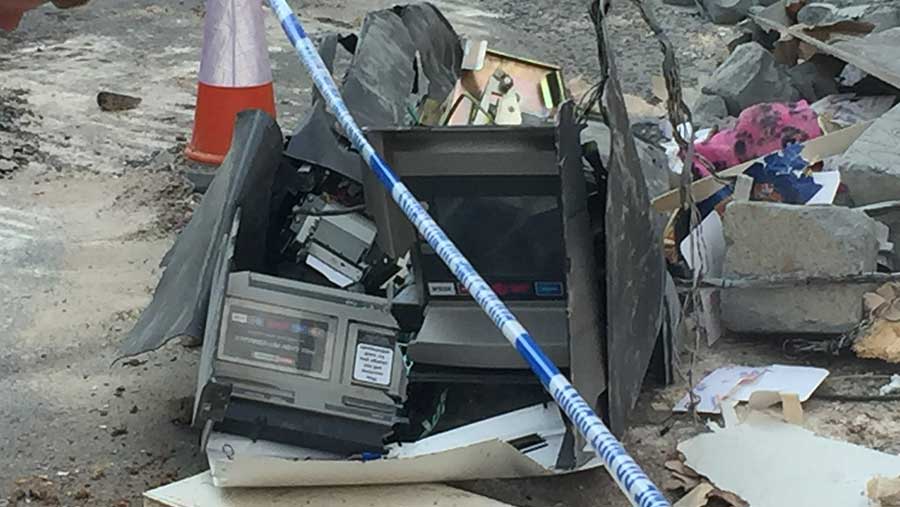 A Hampshire arable farmer found an empty cash machine stolen in a ram raid on a petrol station while combining his crop of oilseed rape.

The farmer, whose identity we have chosen not to reveal, told Farmers Weekly that he discovered the damaged ATM hidden under a coat in a hedge on a farm near Basingstoke.

He alerted officers from Hampshire Constabulary, who attended the farm within two hours.

Police confirmed to the farmer that the cash machine had been ripped off the wall a few days earlier by thieves, who ram-raided a Mace store at a Texaco petrol station in Dunley’s Hill, Odiham, on 14 July.

“We were out combining some oilseed rape in our Claas Lexion 660 and when we moved the header around, we noticed a huge piece of steel in the hedge. It was covered by a coat,” said the farmer.

“The thieves stole a big track digger from a construction site, drove it 200m up the hill through a field on to a road and straight through a petrol station forecourt. The raid happened in the early hours of the morning but they were pretty ballsy.

“The cash machine contained £56,000 and they used an angle grinder to break through its steel casing. There was nothing left in it when I found it except an old pair of gloves.”

The farmer said officers told him the ram raid in Odiham is being linked to a number of similar cash machine thefts across the county.

“The thieves appear to be targeting a specific type of cash machine. It’s clear they know how to open it,” added the farmer.

Police have urged farmers and landowners to take steps to prevent the theft of farm machinery that could be used in cash machine ram raids.

“We would urge every farmer and landowner to take steps to prevent the theft of farm machinery, which is then used by gangs to commit crimes.”

Since February, there have been at least 14 cash machine ram raids carried out across north-east Hampshire and Surrey, including petrol stations, banks and convenience stores in Farnham, Banstead, Farnborough, Guildford, Haslemere and Woking.

Anyone with information on the theft in Odiham or other cash machine thefts is urged to contact police on 101.

Rural crooks are stealing telehandlers from farms either to sell on or use to commit further crimes with increasing regularity, according to rural insurer NFU Mutual.

Clive Harris, NFU Mutual’s agricultural vehicle specialist, said the theft of Manitou and JCB telehandlers is “very much in vogue with the criminal fraternity” at the moment.

“They are being stolen for resale, export and cloning,” added Mr Harris.

He urged farmers to consider “layers of security” to prevent the theft of telehandlers, tractors and other farm machinery.

“JCBs use the Cesar marking scheme, unique keys and an asset management system that doubles up as a tracking system,” said Mr Harris.