A heartbroken farmer has told of his devastation after thugs killed a four-month old heifer with a shotgun.

Alan Collins said he discovered the Blue Belgian lying in a pool of blood in a cattle shed at Parks Farm, a 134ha mixed farm in Conisbrough, near Doncaster, south Yorkshire, on Sunday evening (6 August).

Mr Collins said the heifer had been “peppered with pellets” to its face and parts of its body and was in agony.

He immediately called for the vet, who rushed to the scene and made every effort to save the calf.

However, the animal died from a mix of shock and its injuries in the early hours of Monday (7 August).

Mr Collins told Farmers Weekly he and his brother Billy, who manage the farm together, felt disgusted.

The brothers have offered a £500 reward for any information that leads to the arrest and successful prosecution of the offender.

“It makes me feel sick to the bottom of stomach that someone could do this,” said Alan Collins.

“We look after our cattle. I’m proud of the way we care for them. They are always fed, watered and kept on clean bedding.

“They are beef cattle. We know that one day they will be sold at market for slaughter. That is part of life.

“I’m disappointed that someone could come on to my farm in the middle of the day while we are harvesting and open fire on a defenceless cow. I cannot believe what they have done.” 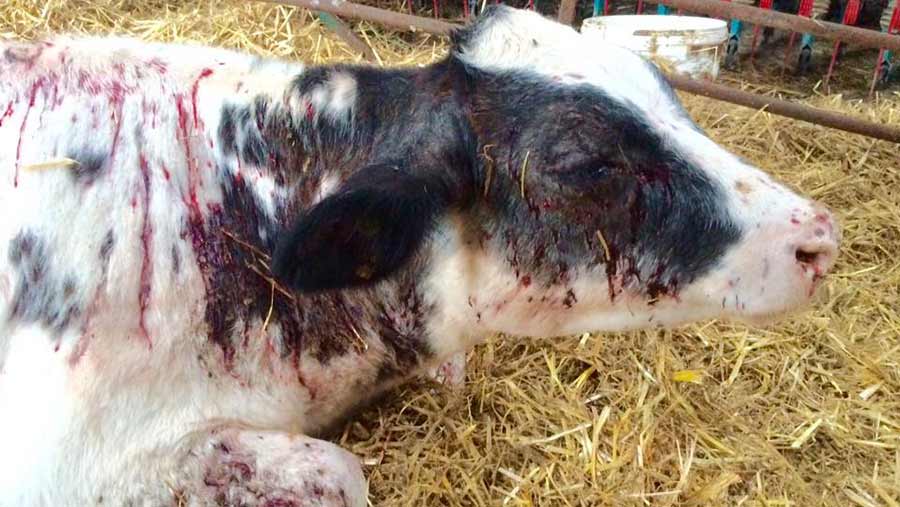 Mr Collins farms 60 cattle, mainly Belgian Blues, and arable crops. He said the heifer was among other youngstock being housed.

The cattle are kept in a shed in the farmyard. They were checked at 7.30am on Sunday and were all fine. They were also monitored throughout the day.

But Mr Collins discovered the injured heifer at 5pm on Sunday. He believes the attackers struck sometime between 12 noon and 1.30pm.

Billy Collins’ wife Wendy, who posted the pictures of the heifer on Facebook, said: “If you have any information at all contact the police or private message me, all information will be treated in confidence.

“Thank you all for your kind comments. We are determined to catch the person responsible for this despicable crime.”

South Yorkshire Police has urged anyone with information to call 101 or Crimestoppers anonymously on 0800 555 111.