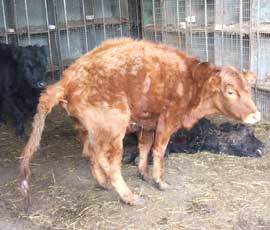 A farmer has been jailed for 12 months after scores of dead and rotting animals were found on his farm.

Animals were found starving, with no access to food or water, and feeding off the carcasses of dead animals, a court heard.

Sentencing him for animal cruelty and breaching animal by-product laws at Nottingham Crown Court on Friday (27 January), Judge Michael Stokes QC, the Recorder of Nottingham, said: I’ve never in my life seen anything as appalling that what I saw on the DVDs and photographs shown to me.”

The DVD and pictures were from an inspection carried out by Nottinghamshire Country Council trading standards following a complaint from a member of the public who had concerns over the welfare of animals on the farm.

Trading standards officers who visited White Haven Farm in Goosedale Lane, Bestwood, told the court it was “the most horrific incident that had ever dealt with”.

Commenting on the case, the NFU said it was shocked by Littlewood’s neglect.

“This seems to be a very exceptional situation and the conditions in which these animals were discovered are shocking in the extreme.”