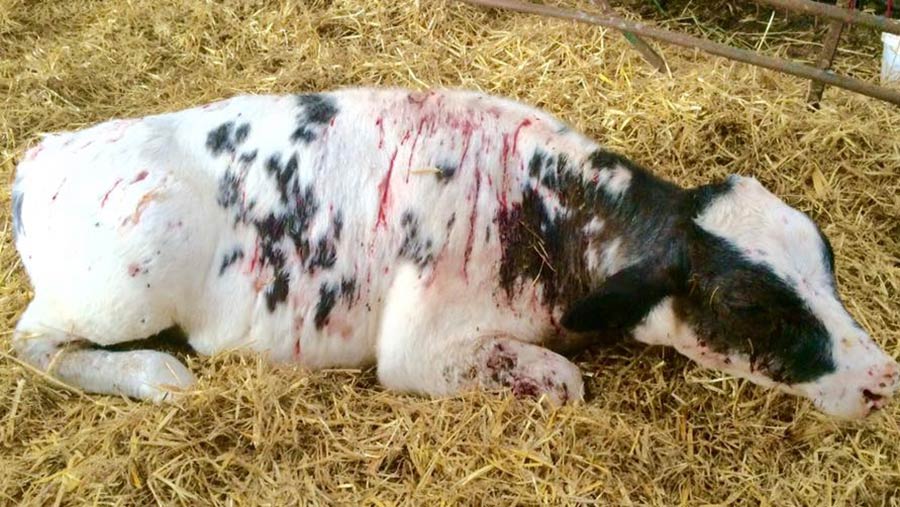 A farming family say they will not rest until they see someone caught for brazenly shooting a four-month-old heifer calf dead on their farm in South Yorkshire.

Alan Collins, who farms with his brother Billy at Parks Farm, Conisbrough, found one of his Belgian Blue calves lying in a pool of blood in the cattle shed on Sunday evening (6 August).

The incident has shocked the farming community, with other farmers branding the perpetrator of the crime “disgusting” and “subhuman”.

Mr Collins told Farmers Weekly he had found the calf just after 5pm lying prone in the cattle shed and covered with flies.

It had been shot twice – once in the head and shoulder and once in the back end – by what police believe was either a 12-bore or .410-gauge shotgun.

“It was laid out, absolutely peppered and covered in blood,” he said.

“It wasn’t just one stream – from its nose to its tail, there were trickles of blood running down it.”

Although the animal was alive when it was first discovered, despite the best efforts of the farm’s vet, it died in the early hours of Monday morning.

Mr Collins said the situation had felt very surreal at the start of the week, but as the days went by, the family were feeling increasingly upset and angry.

“It is not getting easier – it is getting harder,” he said.

“I’m very proud of the way we look after our stock, so it makes you feel sick to the bottom of your stomach to see a beast suffering like that.

“I am just so determined that one way or another we will not give up.

“I don’t care how long this takes – whether it is weeks, months or even years – we will not let this drop.”

Mr Collins said one of the most unbelievable things about the whole incident was that it had taken place in broad daylight.

It is thought the attacker or attackers may have struck when the two brothers went for lunch at about 12.15pm, returning to the yard at 1.30pm after checking whether one of their fields was ready to harvest.

“We were in the farmyard all morning and the police have said to us there is a possibility that whoever did this watched us come away for dinner.

“We live in some farm cottages that are about one-quarter-of-a mile away, but there is only one way in and out of the farm with a vehicle and that is past the cottages.

“We’ve also been around the whole boundary of the farm and there is no sign that anyone has crossed any of the boundaries with a quad bike or vehicle.

“They must have walked in and walked out.”

Mr Collins said tractors were in and out of the yard all afternoon carting corn from the combine and they saw or heard nothing suspicious.

The two brothers have offered a £500 reward for any information that leads to the arrest and successful prosecution of the offender.

South Yorkshire Police has urged anyone with information to call 101 or Crimestoppers anonymously on 0800 555 111.