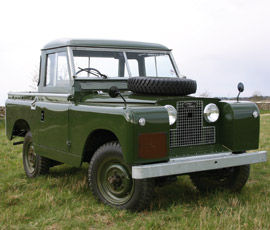 Police in Cheshire have warmed farmers to protect off-road vehicles after a spate of Land Rover thefts.

Ten Land Rover 90s have been stolen over the past 10 weeks from the Macclesfield, Wilmslow and Knutsford areas.

A police spokeswoman said: “We had eight Land Rover 90s stolen in December and two more this month near to the border with Greater Manchester police at High Legh and Little Bollington.

“We do not know why there has been a rise in this particular type of vehicle. But we want to make people aware of this heightened activity so they can tighten security,” the spokeswoman said.

Anyone with information should contact the police if they see people acting suspiciously.

* Did you know you can set up an email alert using Farmers Weekly‘s online Crime Register. https://www.fwi.co.uk/crimeregister.

The alert will warn you when crimes are recorded in your neighbourhood.