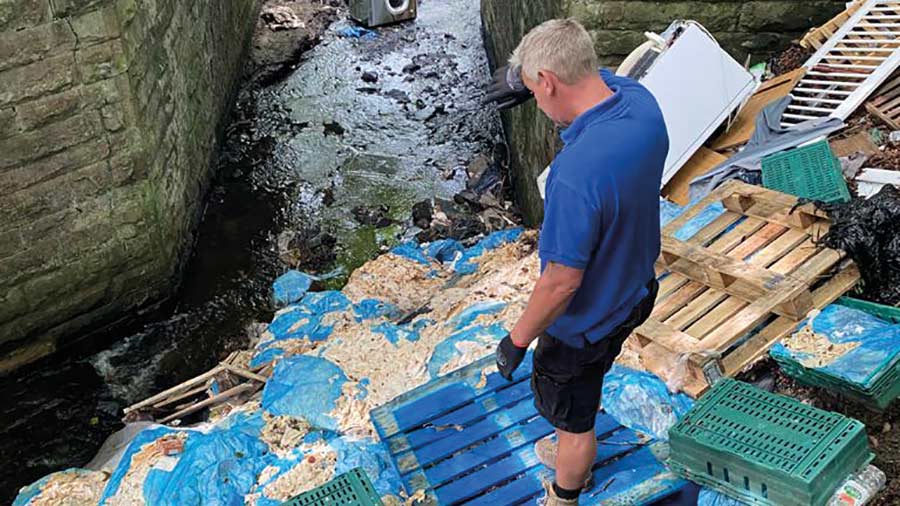 A Lanarkshire farmer has had to pay about £2,000 to have a load of raw meat removed from a stream on his farm, having become another victim of fly-tipping in Scotland.

Davy Shanks from Glenmavis, Airdrie, found 2t of waste meat from a processing plant, dumped from a road bridge onto his land, presenting a huge health and environmental risk.

Despite repeated calls to North Lanarkshire Council for assistance, Mr Shanks was left with organising and paying for the clean-up, using his own staff to shovel the rotting butchery waste into plastic tubs.

These were then removed by local environmental cleaning company Greenerleaf, with Mr Shanks having to pay for overtime, as the clean-up took place at the weekend.

North Lanarkshire council roads department did agree to a 24-hour road closure, to enable the work to be conducted safely, while the Scottish Environment Protection Agency is investigating the incident.

Mr Shanks said: “It is ridiculous that an incident of this kind, which I could do nothing to prevent, sees me being held responsible for someone else’s waste, simply because it has been dumped on my land.

“Other than agreeing to the road closure, I received little support from my local authority, which failed to return my calls.”

Mr Shanks said the bridge over the stream was a fly-tipping hotspot, and he had seen a tenfold increase in incidents during coronavirus lockdown.

“Until the local authority fences the bridge or introduces CCTV, these incidents will continue to happen,” he said.

“At the same time, there is clearly a case for some of the costs of clearing up to be covered by local authorities rather than farmers and landowners always having to carry the can.”

The incident is one of many highlighted by NFU Scotland (NFUS) and Scottish Land & Estates (SLE), which have written to Scottish environment secretary Roseanna Cunningham, demanding tougher penalties for offenders and more support for victims.

“Many land-based businesses have reported increased instances of rubbish being left by access-takers and wild campers,” they said.

“It also follows a significant spike in cases of fly-tipping of domestic and commercial waste on rural land in recent months – a long-running scourge which, despite the re-opening of household waste recycling centres in early June, has continued to blight the countryside.”

As well increased penalties for offenders, and offer better protection and support for landowners, the two bodies have also called for tighter householder responsibility.

“It is both hugely frustrating and heart-breaking for the people who work on the land when it is abused by an irresponsible minority who leave rubbish behind themselves or deliberately and illegally dump rubbish and waste on farmland and estates.”