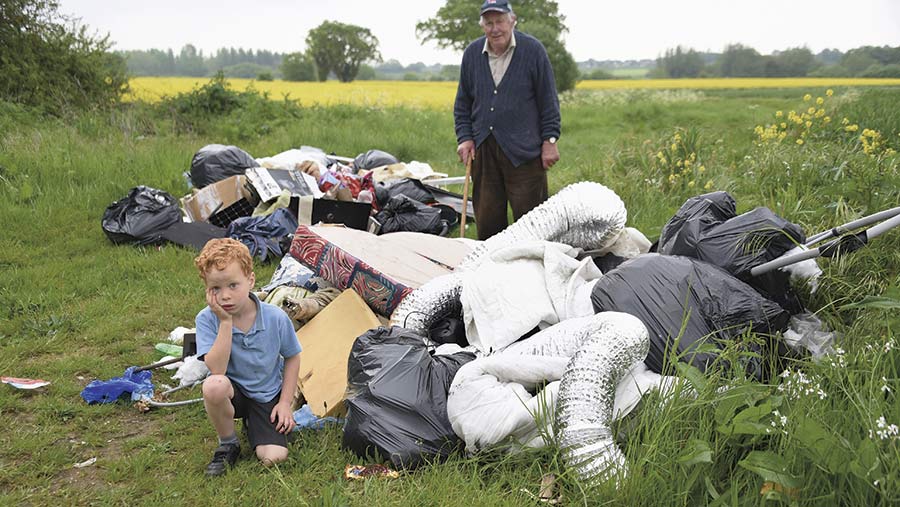 Shameless fly-tippers have targeted a farm in Norfolk five times in a fortnight, leaving the landowner with an expensive clearance bill.

Norfolk sheep farmer David Cross said about 2t of rubbish had been dumped in farm gateways and across rural lanes at Barnards Farm, in Wymondham, over two weeks in May.

Building materials, household waste, hedge trimmings, an old bathroom suite and even baby nappies have been dumped in gateways on the farm.

Mr Cross contacted his local council and police to report the crimes. But because the rubbish has been dumped on his land and not on the highway, it is his responsibility to clean it up.

“I’m a busy man at the moment, trying to care for stock. Besides the cost, finding time to clear the waste is an issue,” he told Farmers Weekly.

“The police have been informed and they said it is not their problem, unless they have got a lead they can follow up.

“South Norfolk Council came out and looked through the rubbish to see if there were any clues about who is responsible. They said it was not their problem, unless it was on the side of the road.”

Mr Cross suspects the rubbish was dumped by unscrupulous traders, who may have been paid by householders to remove it responsibly, but decided to dump it in the countryside instead.

South Norfolk Council urged businesses and residents to ensure they dispose of their waste responsibly.

A council spokesman said: “Using non-registered operators may seem like a cheap option, but your waste could end up blighting our beautiful countryside and costing taxpayers hundreds of pounds to clean-up.

“Ultimately, if you don’t follow the proper steps you could end up in court with a hefty fine to pay.”

The Country, Land and Business Association (CLA) wants the law courts to use their powers to hand out tougher penalties for fly-tippers.

CLA East regional director Ben Underwood said: “We want the stiffest penalties possible handed out to those found responsible for fly-tipping. Only when people see evidence of authorities taking stronger action will we begin to tackle the problem.”