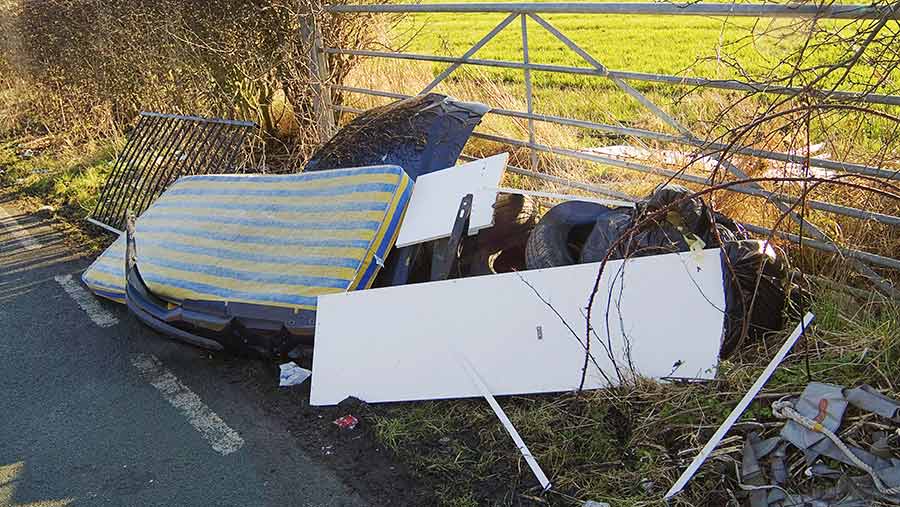 Private landowners are calling for stronger enforcement of legal action to help combat the scourge of fly-tipping in the countryside, after new figures showed a 43% jump in large-scale dumpings.

Figures released by Defra on Thursday (15 November) show incidents of waste dumped illegally on public land that have been reported to and cleared by local authorities decreased by 1% from 2016/17 to 2017/18.

But fly-tipping involving significant or multi-loads of waste was up 43% to 14,430 incidents, with a clean-up cost of over £12m.

Landowners’ lobby group the CLA – which represents more than 30,000 landowners, farmers and rural businesses in England and Wales – says the figures do not reflect the true scale of the crime because reports of fly-tipping on private rural land are not included.

The organisation called for stronger enforcement of legal action by local authorities to really combat the crime.

“The reality is that overall, figures are considerably higher than these latest official figures, as many incidents go unrecorded and unreported,” said CLA president Tim Breitmeyer.

“Private landowners are liable for any waste dumped on their land and are fed up with having to clear up other people’s mess, and paying for the privilege.”

The CLA said it was vital that councils undertake more prosecutions to send a clear message to fly-tippers that waste crime does not pay. Stiffer financial penalties and the seizure of vehicles used to fly-tip would also deter offenders.

Meanwhile, an independent review published on Wednesday (14 November), found that fly-tipping is a key element of serious and organised waste crime.

It found that in the last year, the Environment Agency has closed down more than 800 illegal waste sites and brought almost 100 successful waste crime prosecutions.

An investigation, known as Operation Cesium, is looking into illegally dumped baled waste at 17 sites across the Midlands, North West and North East.

These sites continue to create severe problems for local communities and business, particularly in rural areas, the report said.

In April 2017, Farmers Weekly launched Stop the Blot, a campaign supported by the CLA, which raised awareness of the nationwide epidemic of fly-tipping on UK farms.

The campaign called for a change to legislation which unfairly penalises farmers and places the responsibility on the landowner to remove waste dumped on private land and dispose of it legally.