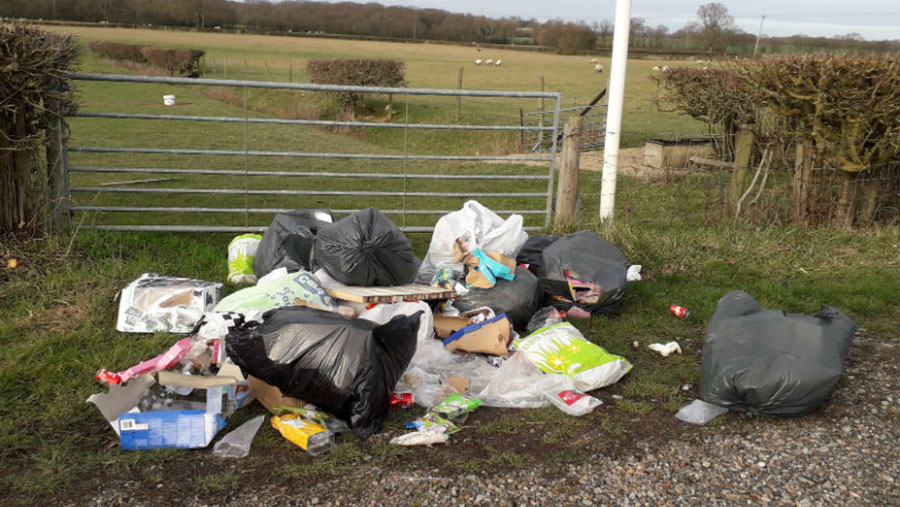 A woman who dumped domestic rubbish outside farmland has been ordered to pay more than £2,250 by magistrates.

Ashford Borough Council said the case highlights its “zero-tolerance approach” towards fly-tipping in the countryside.

Responding to reports in January about three separate incidents of fly-tipping in Criol Lane, north of Shadoxhurst, near Ashford, council staff visited the site and sifted through the domestic waste dumped near farmland.

They found items identifying a Kayleigh Louise Wigman. When council officers requested information from Ms Wigman on how these items came to be dumped in Criol Lane, she did not respond or help Ashford Borough Council with their inquiries, which is a further criminal offence.

At Canterbury Magistrates Court on 23 July, lawyers representing the council brought two charges against Ms Wigman of failing to comply with the Environment Act 1995.

She did not attend court, so an application to prove in absence was made by the council. The case was proved, and the defendant was found guilty on both charges.

Ms Wigman was fined £500 for each offence and ordered to pay £1,251.50 in court costs. This included costs for the investigation, to clear up the rubbish and for bringing the case. A victim surcharge was applied by the court.

In this instance, the council was able to use its powers to prosecute Ms Wigman, as the rubbish was dumped on the public highway. If the waste had been dumped on farmland, the private landowner would have been responsible for its safe removal.

Speaking after the case, Cllr Andrew Buchanan, of Ashford Borough Council, said: “We have a zero-tolerance attitude towards fly-tipping. It is a scourge of the countryside and we are determined to do all we can to stamp it out.

“This case demonstrates that, where we have sufficient evidence, the council will have no hesitation in pursuing people through the courts.”

Farmers can also use the NFU’s Rural Crime Reporting Line, in partnership with Crimestoppers, to provide information about fly-tipping by calling 0800 783 0137.