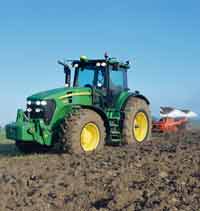 Police are hoping to smash a Europe-wide agricultural machinery racket worth £4.5bn thanks to a security scheme being rolled out across the industry.

The CESAR system hopes to cut the number of farm machinery thefts in the UK in a black market which has seen tractor thefts leap by 41% in 2007 and cost the agricultural industry about £400m a year.

Under the scheme, unveiled to the farming industry at the Tillage Event on Tuesday (15 September), the police plan to register all tractors, telehandlers and other farm machinery on a national database held.

Machines will also be fitted with high-tech security measures including tamper-proof registration plates, miniature security transponders and a special “glue” to capture the DNA of thieves.

Police hope the system, which has been rolled out in the construction industry over the past two years, will help cut the export of stolen machines and increase the amount of equipment being returned to rightful owners.

Detective constable Ian Elliott, who had been working with the Plant and Agricultural National Intelligence Unit, insurers and machinery manufacturers to roll out CESAR, said the scheme could have “huge benefits” for farmers.

“The unit has recovered about £2m worth of stolen construction equipment in the last year,” he said.

Machines without CESAR are also four times more likely to be stolen than registered machines, while the recovery rate for stolen CESAR equipment is 29% – up from just 5% for machines not covered in the scheme.

Insurers are offering premium discounts for machines fitted with CESAR, which offset the £100 cost for fitting the system, he added.

An NFU Mutual spokesman said the insurer was closely involved with rolling out the CESAR initiative in a bid to cut tractor thefts.

“It’s good news that something comprehensive is happening across the industry in response to the alarming increase in agricultural machinery thefts,” he added.