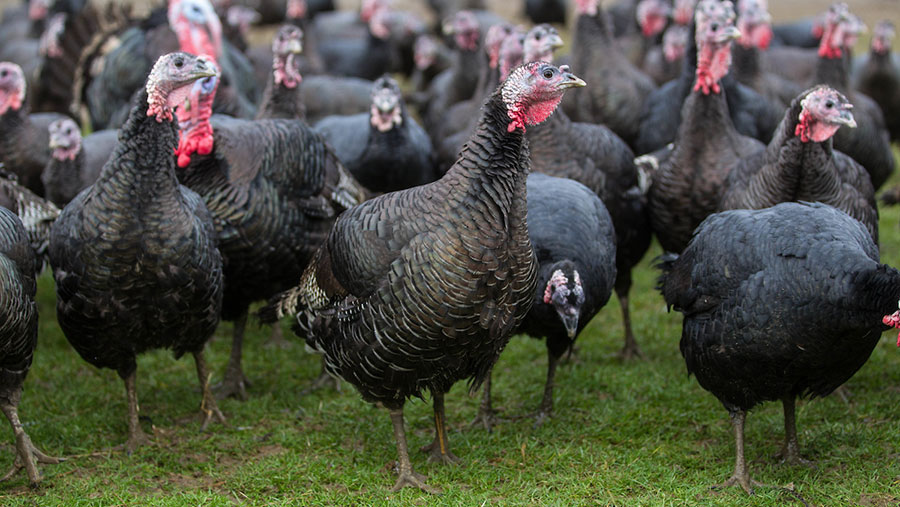 Traditional turkey growers are being urged to stay alert as the holiday season approaches, following the theft of several large birds from a farm in Devon.

John Smye of Broadclyst Community Farm, near Exeter, confirmed that the doors to the turkey pens had been smashed off their hinges and all of the farm’s turkeys stolen.

The incident is believed to have happened at about 4am on Sunday 8 December, and Mr Smye is concerned that the birds may have been killed inhumanely on the site.

See also: So you want to…tap into the Christmas turkey market?

“We are gutted, as a lot of care goes into looking after the birds,” he told the Telegraph.

“It’s that time of year when turkeys are killed, but there are laws in place to ensure welfare at the time of killing.”

Fully prepared, traditional Bronze turkeys typically command a price of £50-£100 when sold at retail in the run-up to Christmas.

With the thieves still at large, Mr Smye has warned those in the area to remain watchful for any suspicious behaviour and to notify the police immediately.

Paul Kelly, a member of the NFU’s national poultry board, told Farmers Weekly that while turkey thefts do increase around Christmas time, he is surprised that live turkeys were targeted.

“This type of thing is not common – most of the time people are after turkeys that have already been killed and plucked.”

For example, last Christmas Eve, more than £20,000 of meat, including turkey, was stolen from Johnsons farm shop near Huntingdon, Cambridgeshire.

Mr Kelly noted that the skills required to pluck and prepare a turkey are not widely known, and that the thieves may not know what to do with the turkeys now that they have them.

He recommended that growers lock up their pens with multiple chains and padlocks.

Some have suggested on social media that the birds may have been taken by vegans activists, who protested at organic turkey farms last year.

But, Mr Smye believes they were most likely killed before they were stolen, which would rule out foul play by activists.