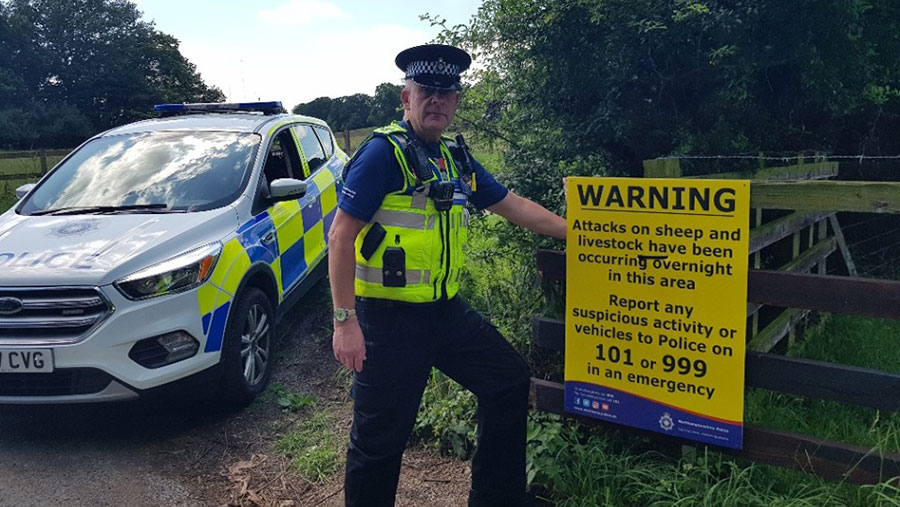 Two men have been arrested over a spate of illegal sheep butchery incidents on farms in the Midlands.

Officers from Northamptonshire Police responded to reports of suspicious activity in a field near Welford on Sunday evening (6 October).

They discovered an offence was in progress and later stopped a vehicle on the A14 shortly after 1am on Monday morning (7 October). The vehicle was seized and it will undergo forensic examination.

A force spokesman said two men, aged 23 and 35, from Birmingham, had been arrested on suspicion of theft and criminal damage. Both men remained in custody on Monday.

In Northamptonshire, there have been 13 recorded incidents of illegal slaughterings on farms since February, with at least 145 sheep and lambs killed.

In addition, since April there have been eight recorded incidents of sheep and lamb thefts in the county, with 258 sheep and lambs reported stolen.

On 13 July, officers also received a report of a live lamb found tied up with electric fencing in the Moulton area.

Police have launched Operation Stock, a partnership involving farmers and the rural community, in a bid to catch those responsible.

Officers and PCSOs have been conducting rural patrols by vehicle, bicycle and even from the air.

A drone owned in partnership with Northamptonshire Fire and Rescue Service and thermal imaging equipment have been used to monitor large rural areas overnight, looking for suspicious activity.

A 40-year-old man from Hampshire was arrested in July in connection with the investigation. Meanwhile, a man from Coventry arrested on suspicion of theft and criminal damage has been released on bail pending further inquiries.

Anyone with information on these offences is urged to call 101 or Crimestoppers anonymously on 0800 555111, quoting Operation Stock.