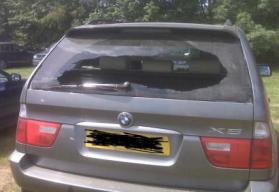 At least three vehicles parked by visitors at Grassland and Muck 2011 had rear windowscreens smashed on the second day of the show (16 May).

Security staff were reporting that they thought the damage was “sheer vandalism” as opposed to theft.

This was because personal items, including bags, were left untouched in the vehicles.

There was also an incident of theft on the showground itself during set-up on Monday (16 May).