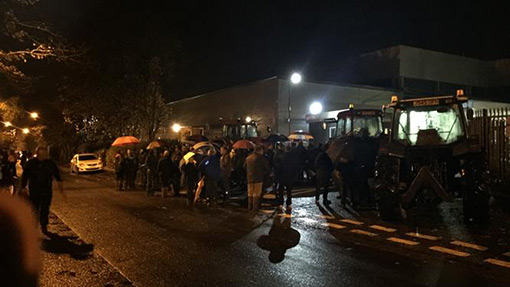 Dairy farmers have blockaded an Adams Foods cheese factory in a protest over “cheap” cheese imports from Ireland and other countries, which they claim are undercutting British dairy producers.

Lobby group Farmers For Action (FFA) led the protest against Adams Foods, which is owned by the Irish Dairy Board (IDB) and is one of the UK’s largest cheese suppliers.

Protesters used about a dozen tractors to prevent lorries from getting in and out of the site.

Paul Rowbottom, FFA co-ordinator for Derbyshire and Staffordshire, said protester numbers swelled to about 400 by midnight. The demonstration continued into the small hours of Wednesday morning (29 October).

Mr Rowbottom said dairy farmers blocked five gates, which caused disruption to transport containers that could not access the site.

The peaceful demonstration was part of an FFA-backed campaign by dairy farmers against processors and retailers after farmgate milk prices have fallen by about 25% in recent months.

“Various people have told us they are being ‘very ambitious’ in the marketplace. But we feel that in the current climate, when British dairy farmers are feeling the pain, there should be some morality coming into it.”

Mr Handley said Adams Foods and the IDB had also been targeted because of “unclear labelling” on their cheese packaging.

“Let’s take the example of the IDB-owned Pilgrims Choice cheese. There is a multi-origin issue with it. We raised it with them 12 months ago that we weren’t happy with it, but they carried on,” he added.

“Pilgrims Choice is made from milk produced in the UK, Ireland, Australia and New Zealand. British farmers have to jump through hoops to comply with Red Tractor guidelines, but they are being undercut and it is not acceptable.”

Mr Handley said he aired his views to Adams Foods HR director at Tuesday night’s protest. “They kept saying: ‘We are noting what you are saying’. But will they change anything? No.”

Farmers Weekly has contacted Adams Foods and requested a response to the claims.

Meanwhile, FFA said more dairy protests were being planned for later this week.

“Farmers are not going to sit down and tolerate this. We will keep up the pressure,” said Mr Handley.

The NFU, which is not supporting the protests, has also repeatedly raised concerns about unclear, inaccurate or misleading labelling of food products.

At this month’s NFU Council meeting, NFU dairy board chairman Rob Harrison told members that the NFU would be stepping up its efforts to push for more accurate labelling of dairy products.

To highlight his point, he showed the audience a packet of Pilgrims Choice cheddar cheese and read off the label: “Cheese produced with milk from the UK, Ireland, Australia and New Zealand.”