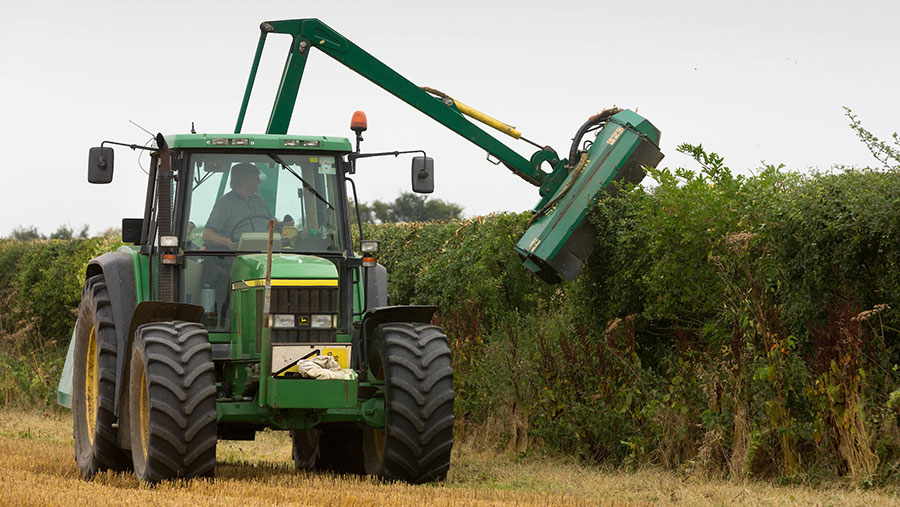 Farm minister George Eustice has ruled out any changes to the August hedgecutting ban at least before the UK leaves the EU in March 2019.

Tom Pursglove, Conservative MP for Corby and East Northamptonshire, wrote to Mr Eustice in December on behalf of his constituent and hedgecutting contractor Bob Rutt, urging Defra to review the ban.

The petition, which gathered almost 2,000 signatures and was backed by the NFU, CLA, the Tenant Farmers’ Association and the National Association of Agricultural Contractors, urged Defra to repeal the August ban.

The extended ban is deeply unpopular with farm contractors as it forces them to sit out a month when they would traditionally follow the combines around and trim hedges.

But conservationists, including the RSPB, say the August ban must remain as some “red-listed” (endangered) bird species, including the yellowhammer, are still nesting “well into August”.

In his response to Mr Pursglove, Mr Eustice writes: “I am aware there is a strong body of opinion in the farming community on this issue, however, we do not generally respond to petitions unless they come via the parliamentary petition website.

“In England, evidence from the Nest Record Scheme shows the bird breeding and rearing season is primarily March to August, with farmland birds such as the blackbird, whitethroat, goldfinch, bullfinch, turtle dove and yellowhammer having and rearing late broods during August.

“We therefore have a legal requirement to protect not just young birds in the nest but also the food resource and shelter provided by hedges during the rearing period after they have left the nest.”

Mr Rutt, who trims about 2,630ha of hedges in the Northamptonshire/Leicestershire/Rutland area, said he was disappointed with the minister’s response.

“Defra is listening to one side of the argument, which is being driven by the RSPB,” he told Farmers Weekly.

“I have been trying to get a meeting over the table in London with Defra for two years to discuss the issue.

“I believe the August ban is totally unjustified and is doing little to reverse the decline in farmland bird numbers. There are all sorts of other factors, such as predation from raptors, corvids (carrion crows, magpies and jays) and domestic cats.”

The hedgecutting ban runs from 1 March to 31 August (inclusive) in the UK. The change in cutting dates from 2015 was introduced under new EU regulations requiring the protection of birds during both the breeding and rearing season.

The six-month closed period that places a ban on cutting and trimming hedges and trees is a cross-compliance requirement under GAEC 7a: Boundaries and GAEC 7c: Trees.