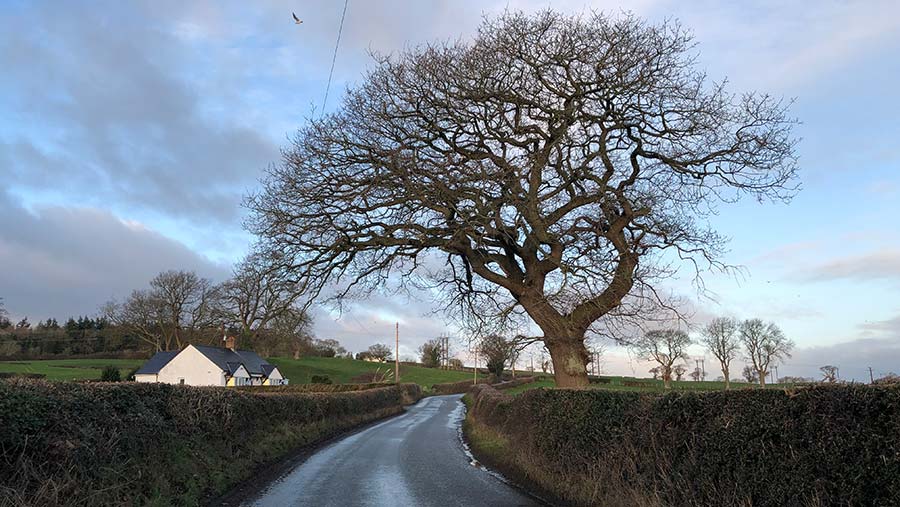 Few farm businesses will be spared the cost of dealing with ash dieback, and for those with infected trees straddling public roads, bills could run into thousands of pounds.

Landowners, under both the civil law and criminal law, have responsibility for the health and safety of those on or near their land.

If a tree affected with ash dieback falls, or branches fall, due to the disease, landowners could be liable to pay damages and could even be prosecuted.

In the UK, landowners are responsible for undertaking risk management of the dangers, but in Wales, councils have gone a step further.

Farmers in Wales are being issued with orders to remove trees infected with ash dieback.

We look at the implications and explain where farmers stand on the issue.

Local authorities and trunk road agencies are tagging affected trees along roads and cycle paths in parts of Wales.

Trees that have lost 50% or more of their canopies are being marked, and those with more than 75% loss will be cut down.

Under the Highways Act 1980, Welsh farmers are being issued with Section 154 notices to remove infected ash growing on their land and adjacent to the highway that may pose a safety risk.

Since 2018 there have been 16 such notices issued.

When road closures and traffic restrictions are needed, landowners will be expected to meet the cost of these controls.

A Welsh government spokesman said: “Trunk road agents co-ordinate all works on the network and aim to work with landowners and contractors to be as efficient as possible in maximising traffic management requirements and minimising disruption.”

Farmers and landowners must undertake the work at their own cost, which experts estimate is in the region of £1,000-£1,500/day and there is currently no financial help available to remove trees.

Rory Hutchings, head of rural practice at JCP Solicitors in Swansea, advises that the owner of the land where a tree stands is responsible for the health and safety of those who could be affected by that tree. Liabilities can arise if trees or branches fall.

Mr Hutchings says it is crucial for landowners to identify trees which do pose a risk, either because of ash dieback or another disease.

He recommends that landowners seek guidance on identifying symptoms of ash dieback from the Forestry Commission, the Woodland Trust and Natural Resources Wales.

“For those unsure of the risks their trees may or may not present, the advice is to consult a fully insured tree management professional, particularly in light of case law,” Mr Hutchings recommends.

In one case, decided in 2006, landowners who owed a duty of care to road users from trees abutting the highway were found to be in breach of that duty when a tree had fallen into the road; that tree had a visible structural defect and a concealed fungal defect.

“If a competent inspector had carried out an examination on the tree, the fungal defect would, on the balance of probabilities, have been detected,” Mr Hutchings says.

Landowners must consider public safety and monitor their trees, particularly in areas with high levels of public access.

Legal responsibilities on protection from danger even extend to trespassers.

Felling trees, even those with a disease, requires a felling licence issued by the Forestry Commission.

Unlicensed felling is an offence, although there are some exemptions within the Forestry Act 1967, including where trees are felled to prevent danger, have a diameter not exceeding 8cm or, in the case of coppice of underwood, not exceeding 15cm.

The exemption on danger grounds applies only where there is a real, rather than a perceived, danger, says Mr Hutchings.

“Evidence, for example through an accredited arboriculturalist, can support a landowner’s decision,” he notes.

Other evidence, such as photographic records, site surveys or reports, and inspection checklists, should all be kept.

It is also advisable to record the date when tree felling took place.

Geraint Jones at Farming Connect says an awareness of health and safety is crucial when felling. “Mature trees that have succumbed will be in decline and could also be suffering from secondary infections like honey fungus,” he says.

“The timber becomes brittle and branches are liable to snap, but also the tree itself becomes unstable due to a dying root system and will be prone to wind blow.”

Glamorgan sheep farmer Hugh Cory, who has a tree overhanging a busy highway, admits he is worried.

“I am waiting for it to be assessed to work out if it is dangerous, but there is talk of traffic light systems if it needs sorting out and that would cost me £1,500/day.

“That cost is equivalent to 20 sheep,” says Mr Cory, an NFU Cymru rural affairs board delegate.

“This is adding so much stress to a job which is a difficult situation already.”

The Tree Council estimates that the cost of removing trees in private ownership adjacent to highways will be about £30m, and from woodland next to public areas, £1.4m.

“The risks that dead and diseased ash trees may pose to human health and safety, together with the significant economic and environmental impacts, mean that it is vital to accept that ash dieback cannot be treated as ‘business as usual’ by anyone who manages trees or the landscape,” it says.

With ash dieback continuing to spread, the cost burden on landowners is likely to increase.

Geraint Jones, forestry technical officer at Farming Connect, says the issue is one of great concern among farmers he meets:

“No one had envisaged the scale of this problem, there has been little preparation and now there is a lot of work to be done and timber to be felled,” he adds.

The dangers of brittle timber

In Conwy, former sheep farmer Huw Owen, who sold his flock to establish a wood energy business, is involved in the removal of diseased ash. 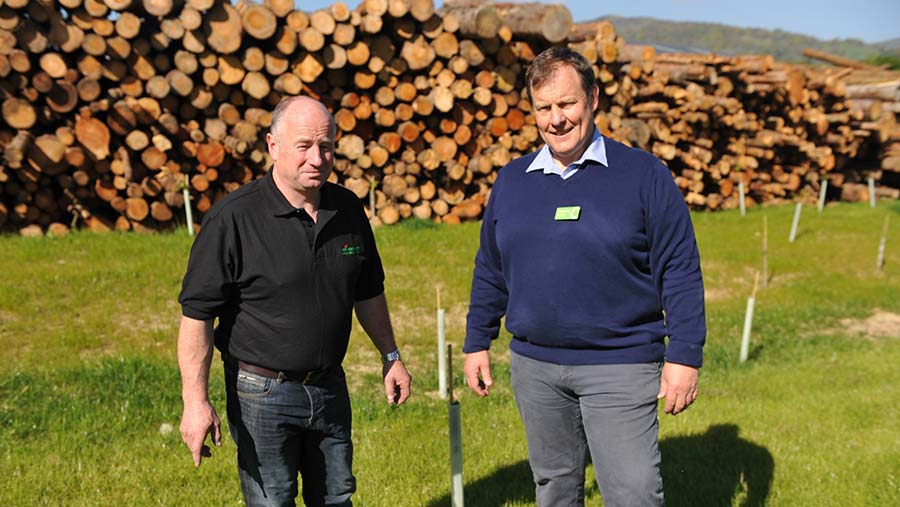 He recently felled 24 trees that were growing on farmland next to the public highway and were considered a safety risk.

Despite his extensive knowledge of trees, he says he was taken aback by how fragile they were.

“Visually, they didn’t look too bad, but as soon as we started cutting them down we realised they were very fragile,” says Mr Owen, of Garthmyn Isaf, near Llanrwst.

He removed the trees using an excavator fitted with a tree shear. “The manner in which diseased trees are cut down is a big issue.

“You can’t climb these trees or use a chainsaw because the timber is very brittle, it would be much too dangerous.”

Another Conwy farmer has been given 12 months to remove three trees from a highway boundary and, because traffic controls are needed while the work is carried out, it will cost him £1,800.

Mr Owen believes simply pruning trees is not a solution because eventually they will need to be felled.

Some farmers have reached deals with timber companies to remove the trees at no cost in return for the wood.

But with vast numbers of trees still to be felled and an expected oversupply of timber, deals like this are less likely to be available in future.

Where to go for advice

Specific guidance on the management of ash trees has been issued as an Ash Dieback Action Plan Toolkit by the Tree Council.

In Wales, Farming Connect will host events in March regarding woodland management, and ash dieback will be a topic for discussion.

What is ash dieback?

Ash dieback is a disease caused by a fungus, Hymenoscyphus fraxineus, which originated in Asia and which arrived in Europe about 30 years ago.

The European ash has no natural defence against the disease and, with no cure or treatment, it is estimated that 95% of the UK’s 2 billion ash trees will succumb.

The disease is spread through fungus spores which initially stick to and penetrate leaves. They eventually penetrate the tree and block its water transport systems, causing it to die.