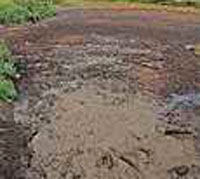 A part-time farmer has been fined £10,000 for allowing slurry from his herd of 70 cows to flood into a neighbour’s home.

John Cockerill was branded “irresponsible” after he allowed manure to collect on his 1.6ha smallholding until heavy rain caused it to flood nearby houses and streams.

York Crown Court heard the slurry gushed down a hillside from Mr Cockerill’s farm into an elderly neighbour’s home, causing so much damage she was forced to move out for more than a month.

The case was described by officials as the worst they had ever seen. The court was told Mr Cockerill allowed about 240t of manure up to 10ft deep to build up on his farm.

Judge James Spencer QC said Mr Cockerill, of Rosedale East in Pickering, Yorkshire, deliberately built his herd to a size he could not manage,

He had been given repeated warnings from the Environment Agency and had been convicted of five offices of failing to ensure the needs of an animal over the past 12 months.