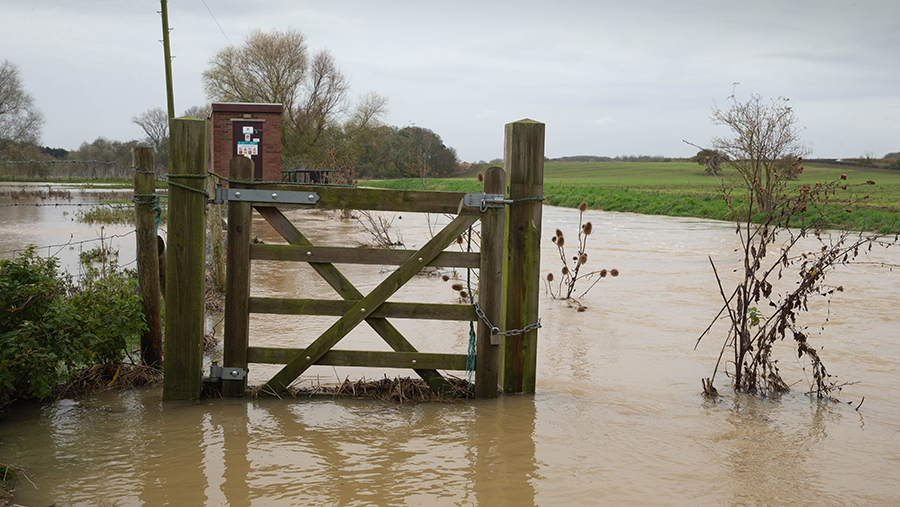 Long-term plans to address flooding were announced by the government on Tuesday (14 July).

They include a record £5.2bn investment to ensure 336,000 properties in England are better protected from flooding by 2027.

Defra secretary George Eustice said: “The devastating impacts of last winter’s flooding were an important reminder of the need to continue to invest and accelerate action to reduce the impact of flooding on our communities.

“Our record investment and ambitious policies will better protect homes, schools, hospitals and businesses, but we also recognise that we cannot prevent flooding entirely, which is why we will ensure that communities at high risk are more resilient.”

Some £200m has been earmarked for innovative projects, including sustainable drainage systems and nature-based solutions – such as temporary or permanent water storage areas – which can boost wildlife in areas at risk of flooding.

The NFU argues that flood and drought risk management needs to be joined up, more innovative and more ambitious.

It has called for greater recognition of the fact that some of the highest-value agricultural land lies in areas vulnerable to flooding.

The union accepts that farmland has a role to play in flood-risk management, which could include the adoption of natural water management and storage measures.

But in doing so, the union says farmers must be properly compensated for the public benefit this provides.

NFU deputy president Stuart Roberts said: “Farmers understand they have a significant role to play in preventing floods reaching towns and cities, but the strategy needs to ensure we have resilient businesses that can withstand these events in the first place and then quickly recover.”

But he added: “It’s vitally important that there’s still long-term funding for maintenance of existing flood defence assets, including ring-fenced funding for protection of agricultural land.”

“There should be a simpler system enabling farmers to carry out minor flood defence work on their own property to protect their assets and livelihoods.”

Neil Parish MP, who chairs the House of Commons committee that scrutinises Defra policy, said some communities had been flooded six times in just five years, while others may have to abandon their towns or villages to the sea.

“That is why, through several parliaments, the Efra committee has been calling for action.

“We will now be closely scrutinising what this new strategy means for those affected by flooding, and when they will be given certainty about how they will be protected in the future.”