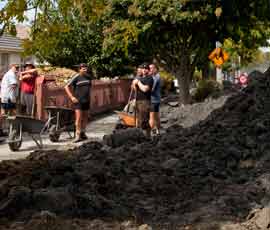 UK farmers are being urged to support a relief fund established to help farmers and rural communities hit by the recent earthquakes in New Zealand.

A British sheep farmer and contractor, who emigrated to New Zealand in the 1990s, has established a fund which he hopes farmers who have employed Kiwi shearers will contribute to.

Roly Ellis ran Downland Sheepworld near Newbury, Berkshire from 1972 to 1992 and is a former chairman of the national Sheep Association for Southern England.

Mr Ellis emigrated to New Zealand in 1992 to buy a farm and has since been elected Mayor of Tararua District Council on the North Island. This is a rural area where over a third of the workers in the region are employed in the agricultural industry.

The most recent earthquake was the Christchurch one on 22 February which measured 6.3 and led to 166 people losing their life.

But this followed earthquakes on 4 September and 26 December 2010. The epicentre of the first quake was at Darfield, 40 kms west of Christchurch, which is a good arable and stock farming area.

“The area was shattered – farmhouses, schools and urban houses in the district for some kilometres were flattened,” said Mr Ellis. “Grain silos, woolsheds, farm buildings, fences and roads have been destroyed. Paddocks have moved and trees flattened.”

Mr Ellis said the people affected were resilient but they had years ahead of rebuilding ahead of them and they needed help.

“I am hoping that British farmers can help my Tararua Mayoral Relief Fund,” he said.

“When the dust settles this fund will support a project in the rural area so badly affected. Many of you have employed Kiwis – I employed over 1,000 in my twenty years of sheep contracting – and some have friends and relations here. I hope you will find it possible to help me rebuild something for these rural people.”

Farmers can make donations to the Tararua District Council – Christchurch Earthquake Appeal Fund. The sort code is 826013 and account number 10151184