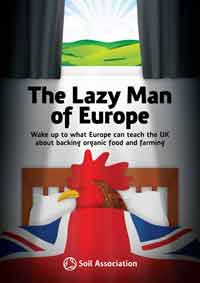 The British Government has been accused of being lazy in its failure to promote organic farming as a sustainable way of producing food.

A report by the Soil Association accuses the government of being “bottom of the league” in its support for organic food and agriculture. It said the UK government has been dissident in its thinking about sustainable food and farming and it should recognise and promote the benefits of organic production in the way other European countries do.

Launched at the Soil Association annual conference in Manchester on Wednesday (9 February), the report, The Lazy Man Of Europe, calls for the government to champion organic systems as a “pioneering, sustainable, environmental, friendly” way of producing food. It says leaders should look to the rest of the EU to learn about how to properly support the organic food and farming sector.

“The global production of organic food is set to grow substantially with the organic market frequently cited as one of the most significant growth market in the food industry, yet sales of organics in the UK suffered in the recession while other large markets in Europe did not,” the report says.

“The organic market in Austria, Denmark, France, Germany and Switzerland continued to grow in 2009 despite the recession. These are countries where government and official agencies think it normal to back organic food and farming and the benefits are clearly recognised”. Setting out a series of recommendations to the UK government, the report says the organic market should be welcomed as an important growth area and as a vital tool in the sustainable food production.

It also calls for changes in the direct support element of the CAP (Pillar 1) to support organic production as well as more funding for research and promotion of organic food.

Peter Melchett, Soil Association policy director, told delegates: “Farm minister Jim Paice has said that organic principles lead the way on sustainable farming.” The results of our investigation provides a blueprint for the government to move the UK from the bottom of the European league table when it comes to backing organics.

* The government should welcome the organic market as an important growth area for the UK economy.

* The government should introduce a cross-departmental food strategy that recognises the role of organic and agro-ecological farming in producing food in a resource-constrained world.

* The Department of Health should help consumers make both healthy and environmentally sustainable food choices, including advice to eat organic, local and seasonal food.

* The government should endorse the Food for Life Catering Mark, and ensure that public food procurement standards meet at least the Food for Life silver standard, which guarantees the use of seasonal, freshly prepared produce and some use of organic food.

* Changes to Pillar 1 Common Agricultural Policy (CAP) payments should include a core element of support for organic farming.

* DEFRA should re-establish a dedicated research budget to provide practical solutions to the problems organic farmers and businesses face.

* The government should match any industry funding of generic promotional initiatives for organic to maximise the UK’s use of available EU funding, and use the market to deliver public benefits.