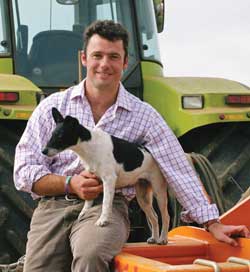 The recent E coli outbreak is unsettling news for anyone hosting farm visits.

However, British farming should take a step back and see how far we have come in the past decade.

Ten years ago the media would have pilloried farming for an outbreak of E coli.

The likes of the Daily Mail would have dragged farming through the gutter and not relented until our then fragile reputation was lying in tatters.

Yet on the whole, the media has been quite restrained.

But where do we go from here? Granted, one must not be flippant over the seriousness of E coli. But, neither can we allow knee jerk legislation undo all our good work. Inevitably, the Health Protection Agency and the Health and Safety executive will be pressured to amend current guidelines for farm visits to mitigate risk, but these must be tempered.

For example, whispers that only children over five years should be allowed to visit farms would appear overzealous.

UK agriculture is an industry that is learning to communicate and is doing it well.

We are recognised around the world as a beacon for reconnecting the consumer with the countryside. I implore farmers and lobby groups not to allow the HPA, HSE and DEFRA to blight that reputation.

The bedrock of reconnection, is giving consumers an opportunity to empathise, to understand and to share in some small way, life on a farm.

Heavy-handed legislation, imposing segregation of animals in an Orwellian and sterile environment will re-awaken a ‘them and us/town and country’ divide we have worked tirelessly to eradicate. Farms would once again appear unwelcoming to visitors.

I’d also be careful to dismiss ‘open farms’ as contrary to ‘working farms’. Open farms are the closest some children will ever get to a working farm. It is unhealthy to chide open farms because many of the public are unable to make a distinction with ‘working’ farms, quid pro quo, the baby gets thrown out with the bath water.

For those who have never hosted a farm visit, give it some thought.

It is not everyone’s bag but it can be more rewarding than a 10 tonne crop of wheat. I have yet to meet a child visiting my farm who can hide their wide-eyed excitement, effervescence and desire to learn.

If you have hosted children on your farm you will know that look. The space, colours, smells, and sounds on a farm, awaken the child’s senses and make one feel very fortunate to be a farmer.

Aside of hundreds and thousands of children and parents that visit farm attractions each year, there will be one million children making a school visit to a farm in 2009. This is three times more than a decade ago and represents nearly a sixth of all school children – amongst the best pupil to farm visit ratios in the world.

Seven years ago farming was being written out of the school Curriculum. Today, FACE (Farming And Countryside Education) is being consulted by the QCDA (Qualifications, Curriculum Development Agency) on how farming can help shape it, because they can see the merits of farm education and visits to farms

Farm visits are a stepping stone to consumer loyalty. They can also serve as farming’s ‘careers office’ to a generation that have never previously considered agriculture or its ancillaries as an employment opportunity.

I would hate to see this E coli episode dampen farmer’s enthusiasm for welcoming visitors or indeed the public’s appetite for visiting farms.

Of course the ramifications will present a challenge.

But each day UK farmers get closer to our consumers and now is not the time to shut our gates on them.