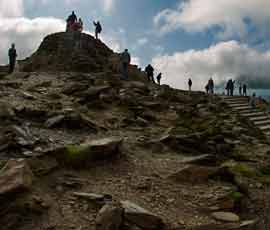 The National Trust has launched a £1million appeal to buy the farm and lake that forms the backdrop to Snowdon.

The trust wants to purchase Llyndy Isaf, a 248 hectare (614 acre) hill farm in the Nant Gwynant valley, to stop it falling into commercial hands.

The farm has been untouched by intensive farming for decades and is also home to a wealth of wildlife.

Richard Neale, the National Trust’s general manager in Snowdonia said: “When I look at the landscape of this small but spectacular corner of Wales I can’t think of a more deserving location for National Trust protection than Llyndy Isaf.

“There is a real danger that if we don’t raise the £1million needed to acquire the farm and lake it could fall in to commercial hands with all of the uncertainty that this raises for the future of this tranquil place.”

Ken Owen, the current owner of the farm who is retiring after 35 years living and working the land, said: “The decision to retire and leave Llyndy Isaf was not an easy one. It’s a beautiful place and we’ve spent many very happy years here.

“We’ve worked hard and over that time we’ve realised more and more the importance of farming in harmony with the environment and that’s why we have offered the farm to the National Trust as I know they will continue to farm it in the same way that I have.”

If the National Trust is successful walkers and campers will continue to have access to the farm and land around the lake and the plan is to start improving the network of footpaths.

The appeal to buy Llyndy Isaf is launched under the umbrella of the National Trust’s Snowdonia Appeal. In 1998 the appeal raised £4million to buy the 1666 hectare (4118 acres) Hafod-y-Llan estate on the southern flank of Snowdon.