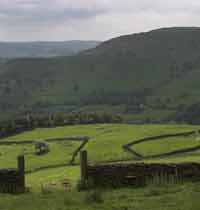 Natural England’s policy of drastically reducing stocking densities in the uplands through Environmental Stewardship Schemes is misguided, according to the Tenant Farmers Association.

The TFA says that under the Higher Level Stewardship Scheme, stocking densities in some upland areas could fall by as much as 75%.

It claims this will have significant knock on effects for the livestock industry, not only in the supply of home produced beef and lamb but in the future availability of the skills needed to produce it.

TFA north east regional chairman Ken Lumley said: “The uplands are not naturally formed.  Hill farming land management has created the uplands we have today, including all the biodiversity that everyone values so highly.

“To reduce stocking levels, with debatable short term environmental benefit, as the main qualification for stewardship schemes, is dangerous as it disrupts the sustainable balance that has existed in the uplands over many generations.”

The TFA is also concerned that funding under the new Uplands Entry Level Scheme, which from next year will replace the Hill Farm Allowance, will be denied to a significant number of tenant farmers and graziers.

Tenants and graziers with less than five years future occupation of the land they farm will not be able to participate and neither will those tenants whose landlords are themselves receiving environmental payments from the government under the standard Entry Level Stewardship Scheme.

“It is quite clear that those who designed the new scheme have little knowledge of how upland farming works,” said TFA chief executive George Dunn.

“If they did, they would not have disenfranchised a whole raft of tenant farmers and graziers from accessing the scheme.  The scheme should have been able to accommodate short duration agreements and landlords who have let their land out for others to farm should never have had access to these schemes in the first place.”

The TFA says it is working with the Tenancy Reform Industry Group (TRIG) to produce guidelines for landowners, tenants and graziers in an attempt to minimise the problems that will occur with this new scheme.