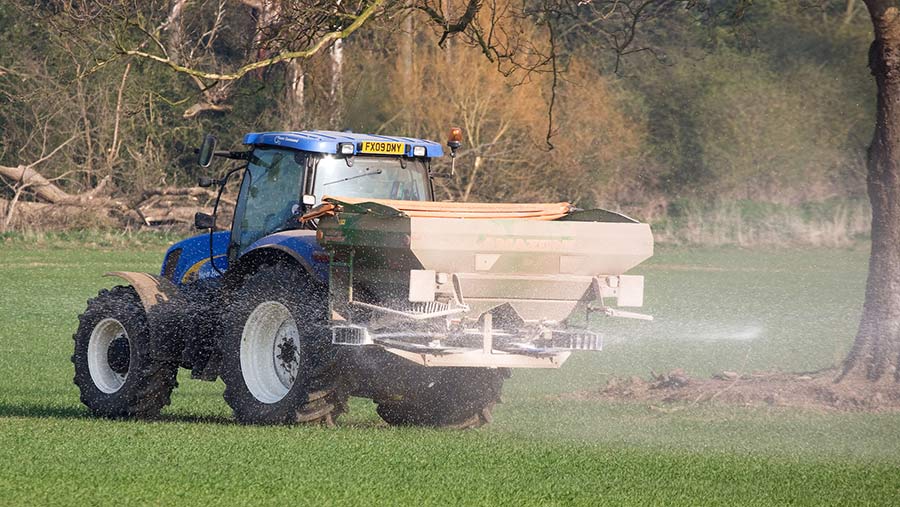 The NFU is seeking to avoid a ban on solid urea in England, as proposed by Defra in its consultation which closed this week (Tuesday, 26 January), and is suggesting an alternative scheme to help reduce ammonia emissions.

It’s proposal is that farmers should only use solid urea between 15 January and 31 March each year, and that this should be included as a recommendation in Red Tractor standards, or made a Facts (Fertiliser Advisers Certification and Training Scheme) qualification.

See also: What a ban on solid urea could mean for farming

Outside of that window, solid urea could still be used, but farmers would be “encouraged” to include a urease inhibitor through a wider industry “ambition” of improving nitrogen use efficiency and nutrient management.

“We believe this [industry-regulated] approach will minimise costs to farmers while ensuring an acceptable [ammonia] emissions reduction is achieved for Defra,” said NFU vice-president Tom Bradshaw.

It would also ensure the continued availability of solid urea, which the NFU says is “vital” to help grow the nation’s food.

“It offers farmers the flexibility to use the right product at the right time to minimise environmental impact, while also helping maintain a competitive fertiliser market,” said Mr Bradshaw.

Banning solid urea would also discriminate against English farmers, who would face increased competition from imports from countries where farmers continue to have full access to the product.

The NFU, in its submission to the Defra consultation, has also pointed to other work the farming industry is doing to reduce ammonia emissions, including using low-emission spreading equipment, improving livestock diets and covering slurry stores.

When Defra launched the consultation last November, it set out three options – an outright ban on solid urea, a restrictive window for its use (from 15 January to 31 March each year), or a requirement to use a urease inhibitor.

It made it clear that an outright ban was its preferred option, despite the anticipated £125m cost to farmers.

The NFU, which has worked with other stakeholders and scientists, believes its suggested approach would avoid the need for regulation while helping Defra achieve its objectives.

It is urging Defra to “look at the bigger picture instead of taking decisions in isolation, given the huge impact it will have on British farming”.

Defra will now consider all consultation responses before issuing a policy decision later in the year.