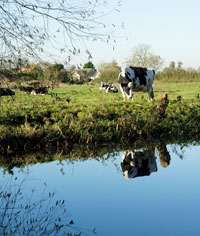 Farmers in England and Wales have been urged to check whether their land has been correctly included in the expanded nitrate vulnerable zone.

DEFRA has agreed to reconsider NVZ designations in England if farmers can prove that their land has been wrongly assessed.

Michael Payne, NFU NVZ consultant, said while the number of successful appeals was likely to be small, it was worth farmers investigating if they were correctly included in the zone.

“With the new controls, being in an NVZ is much more serious than it was before, so it’s worth checking to see,” he said. “You might be one of the lucky ones.”

Mr Payne said he expected farmers to have up to three months to gather evidence, but said an appeal needed to be lodged, with some supporting material, by the end of the month.

“DEFRA published its appeal arrangements on 10 December, considerably later than expected. We are expecting the panel, which will be made up of independent experts, to allow a further period to allow farmers to gather evidence.

“There will be a parallel appeals process in Wales, being carried out by planning inspectors,” he added. “That has just begun and farmers there will have until 31 March to submit appeals.”