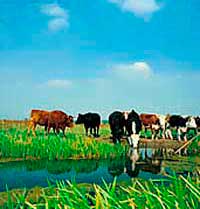 Proposed farm legislation such as the electronic identification of sheep and disease cost and responsibility sharing could put sensitive habitats under threat, according to the NFU.

Speaking at a meeting with the RSPB in Cambridgeshire, NFU deputy president Meurig Raymond said government proposals which could force tenant farmers away from the industry put valuable habitats such as wetlands at risk.

Mr Raymond told the meeting, which aimed to discuss how farm tenants are being used to maintain grazing herd on land in and around the RSPB Ouse Washes Reserve, that such habitats were reliant on graziers.

“This reserve demonstrates how reliant these areas are on grazing stock to provide the right nesting and feeding habitats for birds and other wildlife,” he said.

“Grazing on wetland reserves like the Ouse Washes is essential to the long-term viability for these areas.

“It is very clear that without the graziers and tenants creating the right habitat, the success of these reserves would be compromised.”

“Graziers bring their stock to our reserves year after year because they know we manage stock well. It’s also good to tell the public and consumers about how cattle grazing on reserves benefits birds.”