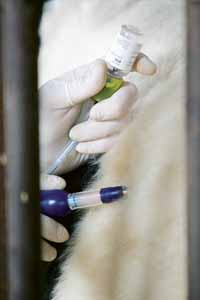 Preparation and collaboration in the livestock industry, along with the willingness of farmers to make controlled decisions, was central to the control of the 2007 bluetongue outbreak.

That was according to the Institute for Animal Health’s Chris Oura, who acknowledged at their conference last week the importance farmers played in bringing the disease under control.

He explained how the Joint Campaign Against Bluetongue (JAB campaign) had been instrumental in getting the message across to farmers, which resulted in the UK being the only country in Europe to have had BTV8 in 2007 and not get it again in 2008.

“Working as an industry, we knew we had to get a message across to farmers, and farmers responded by demonstrating a desperate thirst for knowledge. Farmers then took the message on board, vaccinated and brought the disease under control,” he explained.

But the work of the IAH along with vets, labs, international animal health organisations and the Met Office were key to the highly successful and focussed vaccination campaign, said Dr Oura.

“Preparing for bluetongue involved collaborating with many organisations. Working with the Met Office, for example, allowed us to accurately predict midge activity and also the time of re-emergence in 2008.”

Models were also important in predicting the key areas for targeting vaccination. Being aware of the imminent dangers of the disease also meant the UK was the first country to order and received high levels of vaccine before peak midge activity.

And although northern Europe saw no BTV8 circulation last year, Dr Oura explained as farmers gained a sense of security and a naïve population of livestock increased there was always a risk of bluetongue coming back. “We are hoping this year will be quiet, but something could surprise us again,” he said.

But while bluetongue control was a success story in terms of the industry working together and knowledge transfer, dairy farmer and NFU vice president Gwyn Jones did call for the IAH, researchers and other animal health organisations to engage with farmers more from the outset.

“All too often when new products are developed, the end user isn’t consulted or even considered,” he said. “When starting down a research stream it would be good if we knew there was a market for the findings.”

Mr Jones alluded to the ongoing EU Welfare Quality Project, which he agreed was a good idea in principle, but little awareness of the practicalities of implementing the findings from the outset had resulted in difficulties applying the principles on-farm at the end. “Researchers should feel some responsibility in implementing their findings,” he said.

Mr Jones also urged the IAH to make sure they were getting the message across in the easiest way and targeting the right people. “It’s still a struggle to reach some farmers. If you can write concisely and keep the messages short, clear and practical, that will help farmers make an informed judgement, based on risks.”

With globalisation leading to more movements of livestock and climate change increasing the risk from insect-borne diseases, IAH were looking out and preparing for the next major disease threat, said the institute’s acting director, David Paton.

He explained how the institute’s role was not only in eliminating viral diseases once they had entered the UK, but also to reduce them overseas, thereby minimising the threat to UK farmers.

He warned the threat from overseas viruses was a real one, and there was the potential for huge and indirect losses, brought about from production losses and impact on trade. “That is why there is a need to control the disease at home and at the source,” he said. “Disease is a one-world problem and control is for a global good.”

Prof Paton said they were aware of some obvious disease targets abroad such as African swine fever, midge-borne orbi-viruses like bluetongue and African horse sickness, and foot-and-mouth. “There are other diseases we are not aware of and so horizon scanning is necessary to try and find out and prepare for new threats.”