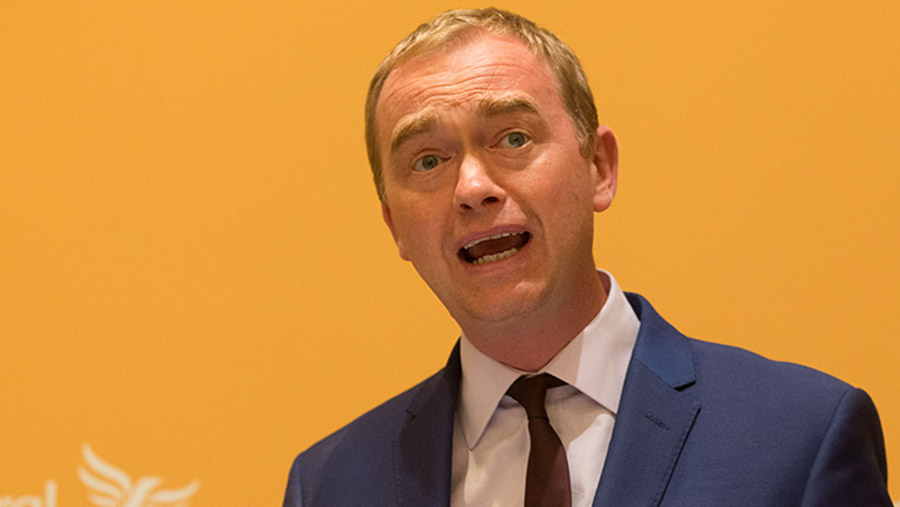 Phasing out direct payments, as proposed in the recently published Agriculture Bill, amounts to a seven-year notice to quit the industry for many farmers, according to former Liberal Democrat leader, Tim Farron.

Under the government’s planned legislation, direct payments will be phased out between 2021 and 2027, with whatever money is then available for agriculture channelled into a new Environmental Land Management Scheme, rewarding farmers for the public goods they deliver.

Addressing an NFU/Food and Drink Federation fringe meeting at this week’s Liberal Democrat conference in Brighton, Mr Farron, MP for Westmorland and Lonsdale, said consumers would suffer from the removal of subsidies on food production, while farmers would see their incomes squeezed.

“If there is a seven-year phasing out of direct payments, for many farmers – especially in the more challenging parts of the West Country and Cumbria – it will be a seven-year notice period to quit the industry altogether,” he said.

NFU vice-president Stuart Roberts agreed that farmers were going to struggle given that they were about to enter an era of no subsidies for basic food production for the first time since the 1920s.

“We’re up to the challenge as farmers, but let’s remember you can’t feed a nation on egos and ideology,” he said.

Mr Roberts did concede that, having studied the Agriculture Bill in more detail since it was first published, there were some elements that were potentially helpful.

“There are actually some really quite interesting things in the Bill, particularly around relationships in the supply chain, contracts and producer organisations.

“This can all help support food, but in its current form, we are desperately short of a UK food strategy. If you don’t feed a nation, they get pretty upset, pretty quickly.”

Mr Fallon also suggested that, should the UK end up with a no-deal Brexit and having to pay tariffs on food exports to the EU, the government had no plans to retaliate with reciprocal tariffs.

“That is because there are a lot more consumers than there are farmers and that is one way of at least temporarily keeping a lid on food prices in the UK.”

Such an approach, which Mr Farron had gleaned from earlier impact analysis documents, would be “throwing British farming under the bus” and would trigger a rapid decline in UK self-sufficiency of food.

Farmers will have to cut their input costs significantly following the removal of direct subsidies if they are to stay in profit, Elise Wach, policy analyst at the Institute of Development Studies, told the fringe meeting.

Quoting from the evidence compendium accompanying the Agriculture Bill, she said farmers would not be able to stay out of the red without direct payments unless they reduced input costs by 31%, or diversified.

“That’s the equivalent of telling people to wear an extra jumper if they can’t afford the heating,” she said.

Ms Wach also questioned the claim that de-linking direct payments from farming during the transition period would encourage older farmers to retire and so open up the sector to new entrants.

“That assumption is a really dangerous one and I think there is a high risk of land consolidation and for land to continue to be seen as a financially efficient investment.”

She was also concerned that de-linking would widen the disconnect between consumers and food production, while paying people who owned farmland but did not necessarily produce food was a backward step.