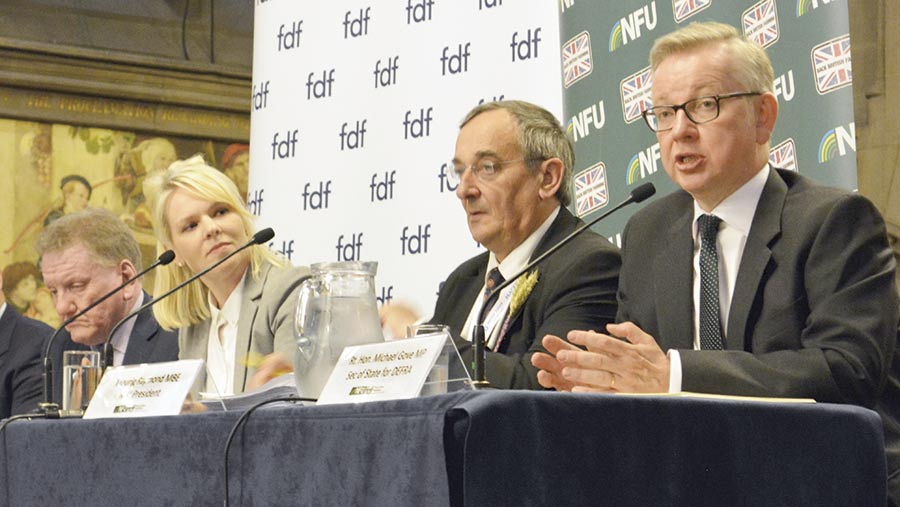 Defra secretary Michael Gove gave a polished politician’s performance at this week’s Conservative Party conference – both when delivering his keynote speech and during the various fringe meetings away from the main stage.

The CAP had been a failure – environmentally damaging and socially unjust, he told conference delegates. It had damaged natural habitats, hit biodiversity and harmed wildlife. “Outside the EU we can do so much better,” said Mr Gove.

This is likely to be the last Tory party conference to be held in Manchester before the UK leaves the EU in March 2019. With its key role in abolishing the protectionist Corn Laws in the mid 19th century, it was an apt city to host a government intent on embracing free trade after Brexit.

As politicians frequently do, Mr Gove talked a lot delivering a better future. He appeared to say the right things to a mostly receptive audience. But he stopped short of making any firm promises or significant policy announcements for agriculture.

That said, the direction of travel is clear: After Brexit, farmers will have to do much more in return for government support. It is clear too that financial support in the form of pound notes – to which farmers currently hold entitlements – will have to be earned.

Much of this will be by doing environmental work. Direct payments will be capped, but farmers who undertake environmental enhancements for the public good should be properly rewarded, Mr Gove told a food and farming fringe meeting at Manchester Town Hall.

First, though, there would be a government consultation, he added – emphasising that his was an initial view and others might think differently. It was important there were no unintended consequences and farm businesses weren’t adversely affected, Mr Gove added.

On the future of neonicotinoid seed treatments, Mr Gove was similarly elusive. Asked whether he supported a ban, he said he wouldn’t pre-empt any announcement the government might make, but was “determined to do everything I can to take the evidence into account in the round”.

The NFU and the Food and Drink Federation fringe meeting took the form of a Q&A with a panel of speakers comprising Mr Gove, NFU president Meurig Raymond, FDF director general Ian Wright and Somerset farmer and cheesemaker Richard Clothier of Wyke Farms.

The Defra secretary’s repeated insistence that it is possible to deliver cheaper yet higher-quality food while simultaneously reducing red tape prompted a warning from Mr Raymond that British farmers mustn’t be left at the mercy of substandard imports.

How and whether the government squares that circle remains to be seen. Indeed, there was a view among many farmers present that Mr Gove should concentrate his policy efforts more on food production agriculture rather than the environment.