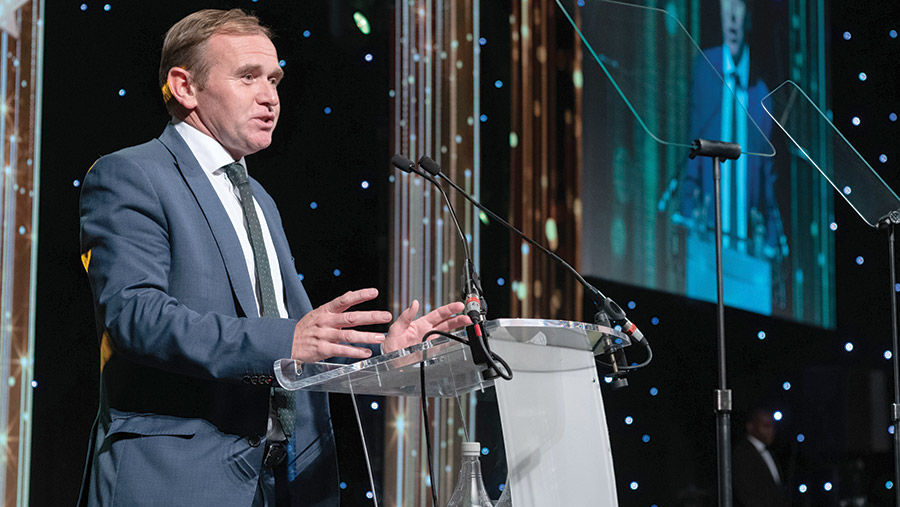 Mr Eustice made the comments in a speech to guests and finalists at the 2019 Farmers Weekly Awards in London on Thursday (4 October).

See also: Meet the winners of the 2019 Farmers Weekly Awards

Acknowledging that many people had “had enough of Brexit” and politics for the time being, Mr Eustice said he appreciated it was an uncertain time.

“We’ve seen some extraordinary political events over the past couple of years,” he said.

“Many constitutional dilemmas have been thrown up, many of our institutions, from our courts to our parliament, have been tested and weaknesses have been exposed.

“However, clarity and a resolution will eventually prevail.”

Mr Eustice said he believed UK farming had a great future – whatever the final outcome of Brexit.

“In the past 20 years, we have seen a growing interest in consumers around food provenance, food standards and more interest in locally produced food.”

People were searching out high-quality British food, said Mr Eustice, including retailers who had stepped up to the challenge and help to develop a brand around UK agriculture.

Regulators, including the government, had played their part in ensuring that the UK had some of the highest food safety standards in the world, he added.

“Most important of all, food producers and farmers – people like you in the room here this evening – have really risen to the challenge to build this market for food that we have in the UK.”

Praising the Farmers Weekly Awards finalists, Mr Eustice said it was clear that there was a culture of innovation, foresight and pursuit of excellence in every sector of farming.

“The UK has some of the great innovators in the world,” he said.

Defra research had shown that the top 30% of performers across virtually all UK farm sectors were among the most efficient and competitive in the world.

The government’s Agriculture Bill would support investment in innovation and adding value to farm produce, as well as fairness and transparency in the supply chain.