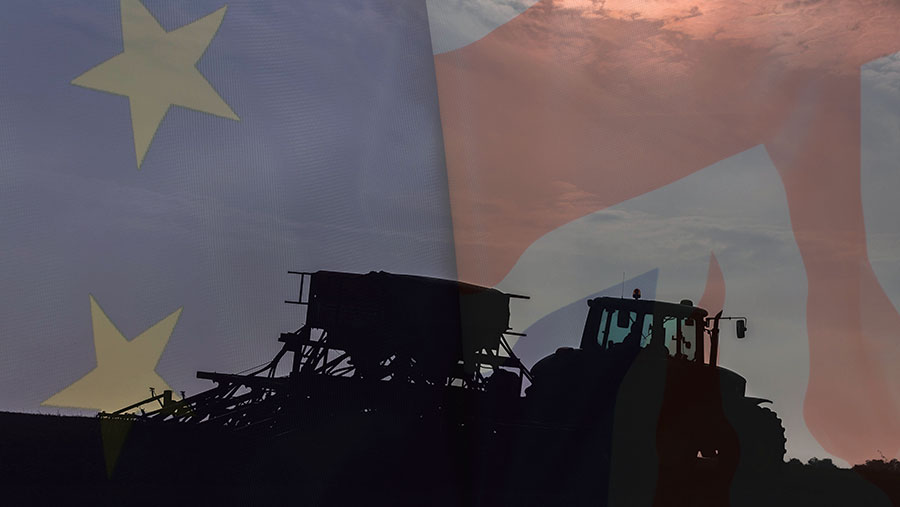 If one subject can be said to have dominated 2016, it has to be Brexit.

Following almost 44 years as a key player in Brussels, the UK went to the polls on 23 June and changed the course of history forever.

The first inkling we had at Farmers Weekly that farmers might be keen to leave the EU was when we ran a quick, snapshot poll on our website in late February, soon after then-prime minister David Cameron’s announcement of the referendum date.

Given the fact that most profit on UK farms can be attributed to direct payments from Brussels, and over 90% of agricultural exports are carried out on a tariff-free basis with other member states, the expectation was that a significant majority would want to remain within the EU.

In fact, that early snap poll of more than 3,000 people showed the exact opposite, with two-thirds of respondents wanting to leave.

And that picture was repeated consistently across several further bits of research undertaken by Farmers Weekly.

This included a random poll of young farmers at the National Federation of Young Farmers’ Clubs’ annual convention in Blackpool, another random poll at the Cereals event, and in a more detailed survey of more than 700 readers conducted in April.

That survey gave some keen insights into the way farmers were thinking.

Those who wanted to leave (58%) were motivated by the same issues as the general public – loss of sovereignty, migration and red tape.

Those who hoped to remain were more concerned about market access and loss of support.

It was also apparent that farmers in the unsupported sectors – poultry, pigs and potatoes – were the happiest to say goodbye to Brussels. Perhaps surprisingly, so too were young farmers and small farmers.

Despite these indications, the outcome of the referendum still came as a surprise – and was at odds with the views of the farming establishment.

Most farming bodies had come out well in advance of the referendum to advise their members to vote remain.

This included the NFU, which said in mid-April that “the interests of farmers are best served by our continuing membership of the EU”. Perhaps surprisingly, it said it was not prepared to campaign on the issue – an interesting stance for a lobbying organisation.

Farmers Weekly also took a view, arguing in our Leader in early June that, “if farming prosperity is your number one concern, then a vote to remain seems to be the preferable option”.

The actual result on 23 June was a clear victory for Defra minister George Eustice, who had been an ardent leave campaigner, spearheading the Farmers for Britain campaign.

His stance was in stark contrast to his boss, the then-Defra secretary Liz Truss (as well as his counterparts in Scotland, Wales and Northern Ireland), who had expressed a firm preference to remain.

Inevitably, the fallout from the referendum has been significant – not least given the rapid restructuring at the heart of government.

At Defra, Liz Truss was replaced by Andrea Leadsom – another keen Brexiteer, who was given the rural portfolio by new prime minister Theresa May, despite having stood against her in the race for the top job.

Another immediate impact was the effect on currency, with the pound sliding against the dollar and the euro.

This has proved something of a boon for farming, with so many farmgate prices linked to the fortunes of sterling.

Many commodities have benefitted, and so too has the value of farm subsidies, with farmers now receiving bigger Basic Payment Scheme deposits.

How long this will last is debatable, as input costs are also set to rise, while the full impact of Brexit on the British economy probably won’t be known for several years.

In the meantime, attention has been focussed on what comes next.

While the actual process of negotiating the terms of Brexit will not start until next spring at the earliest, following the triggering of Article 50, farmer organisations have been quick to state what they believe a new farm policy will look like.

The Tenant Farmers Association was quick out of the blocks, launching a draft blueprint for British agriculture as early as April.

A “three pillar” policy was then announced in July, retaining the current £3bn budget, and splitting it equally between an agri-environment scheme, infrastructure grants and market promotion.

The NFU took a little longer, publishing an options paper in July, and then launching what it described as the “biggest consultation ever” with members in August.

A set of principles for future policy were agreed at an NFU council meeting in October.

They called for maximum access to the single market and seasonal labour, less red tape and protection from substandard imports – though a detailed policy paper is not expected until the NFU conference next February.

Meanwhile, environmental groups have been making their policy objectives well-known.

They have made calls for a rapid winding down of direct payments and an increased requirement for farmers to improve habitats, reduce pollution and help contain flooding in return for any taxpayer support.

Despite the disparate views, there have been numerous calls for all sides to work together, with the NFU writing to rural organisations in late October stating just that.

A letter was also sent to government in late November, signed by more than 70 agri-food companies and organisations.

It told the prime minister that tariff-free access to the EU single market and access to overseas labour are vital for UK food and farming to flourish post-Brexit.

Mr Eustice has dropped numerous hints that he favours a system that takes a more holistic approach to environmental delivery, with mechanisms to help farmers deal with market volatility, such as insurance and futures markets.

Direct payments to farmers do not seem to feature in his thinking.

There is still much uncertainty for the year ahead.

While prime minister Theresa May has promised to trigger Article 50 by the end of March, recent legal challenges about whether parliament should have a say in this could scupper that timetable.

Only once Article 50 is triggered will negotiations with Brussels start in earnest. UK negotiators will clearly want good, if not full access to the single market, but EU politicians are unlikely to give it unless the UK agrees to free movement of people.

While these talks continue, work will progress towards devising a new British agricultural policy.

The detailed policy paper from the NFU due in February will be an important landmark – but it is not the only show in town. There will be plenty of ideas from other farm and environmental lobby groups.

It is also likely that Defra will publish its own “green paper” – possibly before the spring – triggering a more focused consultation on its preferred options.

It is unclear whether the devolved parts of the UK will be part of this exercise, or will be left to conduct their own consultations.

Once Article 50 is triggered, then the UK has two years to conclude negotiations with the EU. But what is also unclear is who the government will be negotiating with.

Elections are to be held in Germany, France and the Netherlands next year. Who holds power in those countries come the autumn will determine the EU’s negotiating mandate over Brexit.

It seems likely there will be much political rhetoric in 2017, but not much in the way of firm decisions.