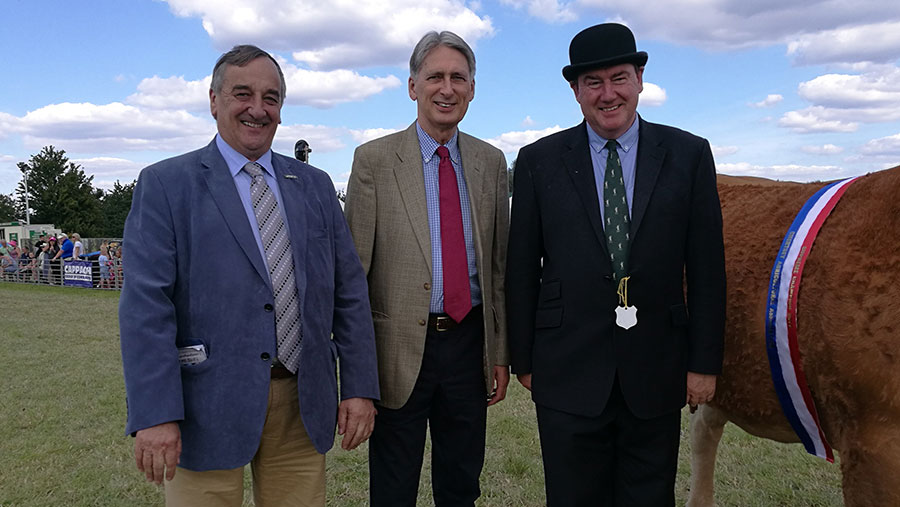 Industry leaders have sounded an upbeat note after holding talks with chancellor Philip Hammond about the future of UK agriculture post Brexit.

Afterwards, Mr Raymond told Farmers Weekly the talks had gone very well and that the chancellor was keen to ensure British agriculture will get a good deal after the UK leaves the EU in March 2019.

“He [Mr Hammond] is very much wanting to direct support into investment, access to capital and how we become more efficient,” said Mr Raymond.

“We talked about food inflation, provenance and UK product and standards. I said to him I was delighted that [Defra secretary] Michael Gove said he was against importing food produced to lower standards.

“But I said I get very nervous when Mr Gove starts talking about enhancing welfare standards. He did say that Michael sticks up for farming at Cabinet.”

The chancellor also explained that, although the UK will leave the single market and customs union on 29 March 2019, the government would be seeking a “Turkish model” customs union agreement which would allow the UK to trade freely with the EU during the transitional period.

Mr Rayner agreed discussions had gone well. He urged farmers to stay positive about Brexit and back politicians to deliver the right result for the industry.

“I think that we are in a safe place, that we have the right team negotiating it,” said Mr Rayner.

“I have great confidence in Philip Hammond and Michael Gove to deliver the right result for the industry.

“We need to support this government as much as we can to get the right deal and we shouldn’t be criticising and complaining until we know the results.”