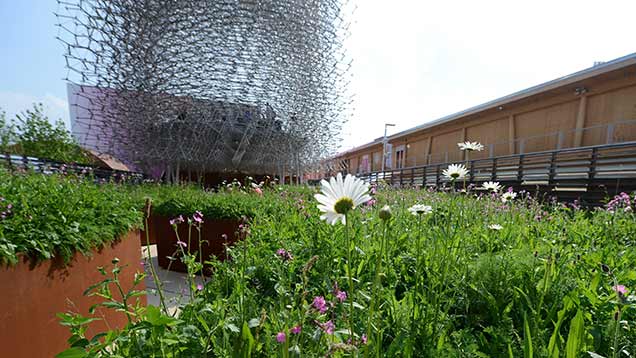 A giant beehive displayed by the UK government at an international food showcase is a slap in the face for British farmers, says the NFU.

The UK is one of 145 nations participating at the World Expo 2015 in Milan, which has as its core theme “Feeding the Planet, Energy for Life”.

The Expo runs until 31 October, with countries highlighting ways they are meeting the challenge of feeding a world population expected to reach nine billion by 2050.

As well as individual countries, it includes contributions from many of the UK’s major political and trading partners – such as the European Union and United Nations.

But while other countries are largely focusing on food exports and agriculture, the UK has chosen to focus on the “crucial role played by pollination in providing the food that we eat”.

Media information provided for journalists about the UK pavilion says the stand “offers visitors a unique experiential journey taken from the perspective of the honey bee.”

The pavilion forms the platform for a programme of UK business, science and cultural events, it adds – highlighting the “leading role the UK plays in overcoming global challenges”.

But the NFU said the UK stand failed to highlight the contribution made by British farmers to food production – or even the fact that the UK was a major food exporter.

“It is a slap in the face,” said NFU deputy president Minette Batters. “This is meant to be a global platform for food exports and British food isn’t even on the agenda.”

The US stand highlighted “American Food 2.0,” said Ms Batters, who has visited the Expo with other global farm leaders.

Ms Batters said the UK should have taken a similar stance – using the Expo to promote British food and farming and encouraging trade.

The UK’s participation in the Milan Expo is being led by UK Trade & Investment (UKTI) with support from seven HM government departments.

A UKTI spokesperson said: “British food and agriculture are central themes of the UK’s presence at Milan Expo 2015.

“British innovation in the food sector is written into the fabric of the UK Pavilion structure, which highlights to visitors among other key facts the 16,000 new products released by the sector every year.”

The UK Pavilion had hosted several events to champion the UK food and drink sector, said the spokesperson.

These included Food and Drink Great Week in May – during which several UK companies travelled to Milan to present their offering to an international audience – and an event on the UK’s National Day (17 June) to promote British food and the British countryside.

“Through this we are aiming to champion the wealth of the UK’s food and drink offer to an international audience,” the spokesperson said.

“The UK Pavilion promotes Britain’s strengths and capabilities in rising to the challenge of feeding the world’s growing population.

“This is achieved not just by producing more food, but by collaborating with international partners and sharing the latest technology and innovative methods to develop new farming and production techniques.”

The quality of Welsh produce had been showcased on the UK Pavilion during Food and Drink Great Week, said the spokesperson.

Furthermore, Defra minister George Eustice would be in Milan during Agri-tech Great Week, commencing 6 July, to champion advances in farming techniques and efficiency.