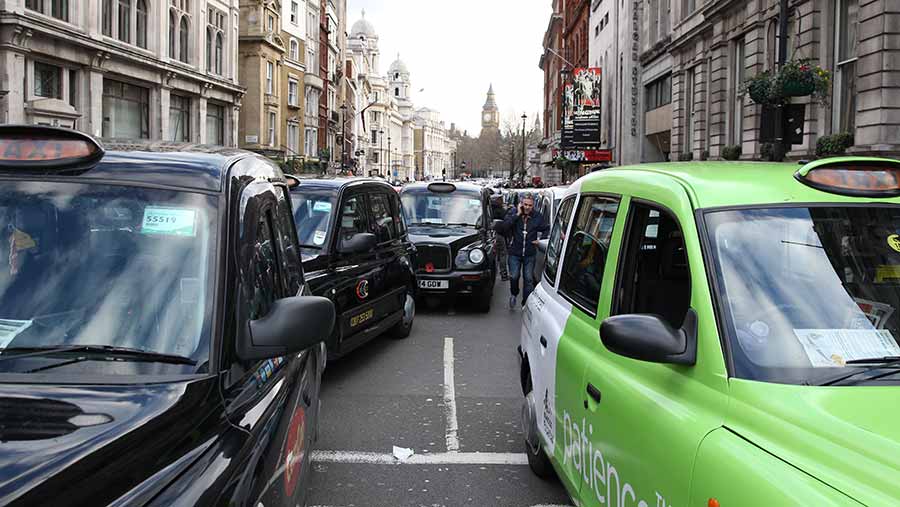 Farmers are being asked to prepare banners, whistles and claxons ahead of a mass protest set to bring central London to a standstill.

Organised by Farmers For Action (FFA), the march through the centre of the capital to Downing Street is due to take place on Wednesday 23 March.

It will take place on the same afternoon as a protest by black cab drivers, who will drive down Whitehall to highlight their opposition to the taxi-hailing app Uber.

Farmers For Action chairman David Handley said: “I am told by one of their representatives they expect there to be a large number of cabs – it could be up to 10,000.”

Mr Handley added: This could be a big day to be in London – the food producers of Great Britain along side the famous London black cabs.”

Final preparations had now been made with police and everything was now in place for the march, which will highlight the plight of producers across a range of farm sectors.

Mr Handley said: “This is an all-sector march – we want to see sheep, pigs, corn, chicken – and hope to see all these enterprises highlighted on your banners.”

He added: “Ten minutes before we move off, the police will be told of our departure time and you will all then see the centre of London come to a standstill.

“To quote the police officer in charge: ‘It is one of the most eerie feelings you have when you walk into Trafalgar Square and there is total silence’.”

Mr Handley said: “The only noise we want to hear are whistles and claxons – we want your banners, as long as they are not offensive in anyway.

“If anyone has a big bass drum or can play a good tune on the bagpipes, they are more than welcome to be at the front to pace the timing.”

Farmers for Action expects thousands of farmers to attend the march, with coaches and buses laid on courtesy of a number of agricultural companies and suppliers.

Urging more farmers to find time to attend the march, Mr Handley said: “We may not achieve anything in London, but we will certainly put British farming right at the top of the agenda.”

Mr Handley said he was still in conversation with a number of processors and retailers over the issue of “seriously declining prices across most farm sectors”.

“Most of what we are having to do in respect of London has been brought about by them and obviously the lack of any leadership from the current government,” he said.

Further protests were likely after the London march.

“The people causing our problems need to be getting very worried because with your support, we will be back at their doors,” said Mr Handley.