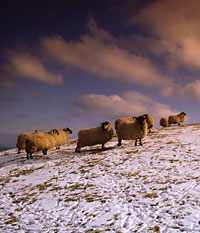 The campaign against the introduction of electronic identification for sheep has been stepped up with a growing consensus for change across the EU.

Top-level political discussions have been held in the UK and a rally of sheep industry groups from all EU states took place in Germany.

That was followed by an announcement that Austria would support Poland, Lithuania, Latvia and Ireland in their call for a voluntary rather than compulsory system.

At a meeting of devolved farming ministers in London, Scotland’s rural affairs minister Richard Lochhead called on DEFRA secretary Hilary Benn to press for changes to the legislation that is due to come into force in stages from January next year.

Mr Lochhead appealed to the minister to raise the issue at the next European Agriculture Council meeting, insisting that concessions already achieved do not go far enough.

“Those farming on the hills in Scotland currently face difficulties which will potentially be compounded by the introduction of the new sheep tagging rules,” said Mr Lochhead.

“We fully support greater disease control, but any benefits for traceability can be outweighed by the costs and practical obstacles of putting them in place.”

Meanwhile NFU Scotland and the National Sheep Association joined sheep groups from all 27 EU states in Frankfurt to express their total opposition to legislation that would require sheep farmers to electronically tag almost every sheep and then maintain records on the whereabouts of each animal.

The union estimates that the cost of compliance with the legislation could be around £3 per sheep in the first year, forcing many producers to reduce sheep numbers.

Speaking ahead of the meeting, NFUS vice president Nigel Miller insisted that any further reduction in the Scottish sheep flock would be a catastrophe for the sector.

In the past decade the number of ewes kept on Scottish farms has fallen by more than 1m and now stands at around 2.8m head – the lowest number since the early 1900s.