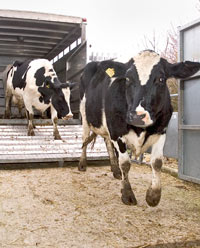 Animal transport plans that could have threatened the future of Scotland’s livestock industry have been withdrawn by the European Commission.

But the Commission has suspended its consultation into the plans, which had been drawn up because current movement regulations had not been adopted widely across Europe.

NFUS, which obtained a leaked copy of the proposals last week, welcomed the withdrawal of the “costly and impractical” plans.

“The proposals threatened to seriously undermine the livestock industry in Scotland for no defined animal welfare benefit,” he said

“We have said, year after year, that any welfare abuses related to transport should be clamped down on by the existing rules being enforced properly, as they are here.

“However, the latest commission proposals would have failed to address this fundamental issue and would have done nothing to address problems where they exist.”

Mr Livesey said the union realised the plans would emerge again and urged livestock industries across Europe to push for a common sense debate on animal transport.

“Our dialogue with the Commission and politicians both here and at home on this issue must continue,” he added.