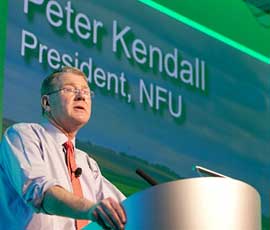 Nominations for candidates wishing to stand for the NFU leadership will close at 5pm on Wednesday (11 January), the union has confirmed.

The NFU’s two-year election cycle means all three top table jobs are up for grabs, although challengers will have to unseat existing officeholders.

After weeks of deliberation, it remains to be seen whether Meurig Raymond has finally decided to challenge president Peter Kendall for the top job.

Mr Raymond has been taking soundings before making a decision after receiving the backing of Devon NFU should he decide to stand for president.

Meanwhile, contenders have already emerged for the posts of deputy and vice-president.

They include former NFU vice-president Paul Temple, who is to stand for the position of deputy president.

The Yorkshire farmer who resigned for personal and business reasons in 2009, told Farmers Weekly he felt he still had a lot to offer the union.

“I still feel passionate about being part the NFU and what the NFU can do.”

Union rules mean Mr Raymond would have to get 75% of the vote to remain deputy president because he has served three consecutive terms in office.

But Mr Temple would only have to secure a simple majority to oust him.

Similar rules have been in place since 1946 when the NFU changed its constitution so office-holders could serve indefinitely.

Peter Kendall, who has already served three consecutive terms in office, must also secure 75% of the vote to remain NFU leader.

At least three candidates have been mentioned in connection with the role of vice-president, currently held by Sussex farmer Gwyn Jones.

Elections will be held on Wednesday 22 February 2012 at a special NFU council meeting following the union’s annual conference in Birmingham.