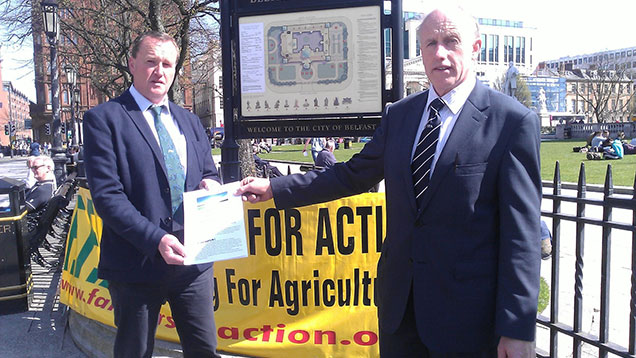 Farmers for Action (FFA) Northern Ireland has launched a checklist to help voters decide which political party to vote for in the general election.

The People’s Prosperity Manifesto was launched in front of Belfast City Hall at the end of April.

The manifesto contains a blueprint of important farming and countrywide political issues which voters can use to help make choices.

See also: What the main parties say about farming

Farmgate pricing legislation, food security and red tape and the future of the EU are among some of the farming topics included in the blueprint.

Other broader subjects approached include health, education and the environment.

The main political parties have all published their manifestos for food and farming.

But FFA NI co-ordinator William Taylor said voters – especially those who were still undecided – could use the manifesto as a checklist to ensure they were voted for candidates who most represented their views and aspirations.

Mr Taylor said: “It has become clear that farmers at the coal face who are not getting properly paid for their produce have a lot in common with the stresses of teacher and health workers etcetera.

“In short, it’s time to rebalance the economy and a sort out of the top civil servants.

“We see the manifesto as the missing link in democracy.”

Read the full manifesto on the Political Concern website.