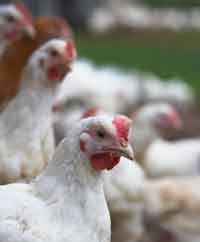 The UK government and EU Commission are taking far too long to make decisions and this delay is having an adverse impact on the poultry industry.

That was the key message from EPIC president Eric Reid of Moy Park at the recent Egg and Poultry Industry Conference near Coventry.

He highlighted how slow officials had been in making a decision on the definition of the term “fresh”, as used on food labels.

“It has taken 4-5 years to decide what fresh means. This is not good enough in a modern, fast moving world.”

Philip Wilkinson of 2 Sisters Food Group added in a question session that he feared that it would take another 4-5 years of debate defining what is a “product” or a “preparation”.

This is crucial as the new EU marketing regulations defining “fresh” only apply to preparations and for some items it was not clear cut if they are a product or a preparation.

He called on the minister to act quickly as the sector needed answers very quickly to be able to implement it by the May 2010 deadline.

Mr Reid moved on to GM soya as another example of slow decision-making in Europe.

The EU’s zero tolerance rule means that where even traces of unauthorised GM is found, the whole shipment is rejected. In recent month, six shipments of maize and soya have been turned away from the EU, raising fears that some exporters may stop shipping soya to the EU.

“We need the politicians, bureaucrats, eurocrats and technocrats to all work together more effectively.”

Mr Reid rounded off his keynote speech by criticising the UK government’s decision to phase out the capital allowances for farm buildings. Under the allowance, producers receive tax relief against their investment.

“Why does a slurry store get capital allowance, but not a poultry shed? Like slurry stores, you can’t use them for anything else.”

Other sectors get thousands of pounds in subsidies while poultry is not subsidised. On top of this, the poultry sector is cheap for government to manage in terms of the number of officials and civil servants.

So with this in mind, he believes it was not asking much for the government to help the poultry industry by retaining the allowance.