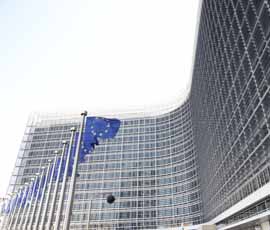 The EU Commission has started the first stages of legal proceedings against 14 member states which have failed to fully enforce the Welfare of Laying Hens Directive.

A commission spokesman told reporters in Brussels that EU inspection teams are visiting all member states to collect evidence of non-compliance to back up any legal action and subsequent fines.

Member states had been warned repeatedly about the consequences of non-compliance, said the spokesman. For example, health commissioner John Dalli had written to ministers last November explaining that infringement proceedings would be launched against any country that failed to meet the 1 January 2012 deadline to convert all conventional cages to enriched cages.

That deadline has now passed, but Belgium, Bulgaria, Cyprus, France, Greece, Hungary, Italy, Latvia, the Netherlands, Malta, Poland, Portugal, Romania and Spain have all failed to meet it.

According to the commission’s latest figures, more than 46.7 million hens are still in conventional cages, representing 14% of the EU flock and by the end of January, around one billion illegal eggs will have been produced and sold into the European market.

“The UK poultry industry has fully complied with the new laws on the welfare of laying hens and now we are told 14 member states have failed to meet the deadline. This is unacceptable,” said Katy Lee, spokesman for the UK farming unions in Brussels.

“We are pleased the commission has begun legal proceedings against non-compliant member states, though it does feel like closing the stable door after the horse has bolted.

“It is now essential that the commission wastes no time in stamping out the illegal production and enforces large enough fines to discourage a similar scenario in the future.”

Before Christmas, the EU Commission wrote “pre-infringement” letters to all member states expected to be non-compliant with the new laws, asking them to submit action plans and lists of producers still using conventional cages.

DEALING WITH THE LAW BREAKERS

• This is followed by a “letter of formal notice”, when the member state is given two months in which to submit its views or conform with the law

• Next, the commission sends the member state a “reasoned opinion”, explaining why it is in breach of EU law and giving it two months to conform

• If there is still non-compliance, the commission may take the member state to the European Court of Justice. Most cases take two years to conclude


Can egg producers wait this long, while DEFRA refuses to ban illegal egg imports and producers in Spain, Poland and Italy carry on with battery cages regardless? Give us your views.