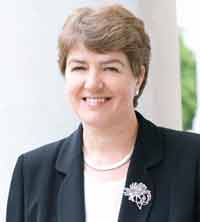 Junior DEFRA minister Jane Kennedy has resigned after refusing to pledge her loyalty to Gordon Brown as the second round of his reshuffle got under way.

Ms Kennedy said she stepped down from the post as she was unable to give assurances that she supported the Prime Minister.

Following a “frank and honest discussion” with Mr Brown, Ms Kennedy said she did not believe he was the right man to lead the Labour Party into the next election.

Mr Brown should indicate he had listened to voters and step aside, she said.

In an interview with Sky News, Ms Kennedy said she spoke to Mr Brown over concerns he would “fight to the bitter end of the Labour Party”.

Denying earlier claims she had been sacked after refusing to pledge publickly back Mr Brown, Ms Kennedy said: “It was a friendly discussion.

“He did not need to personally [ask for my alligience]. Our conversation was comradely and discussed in a frank and honest way, but I had to say what I felt in my heart about the way the party was going.

“In the end, I could have stayed, if I had made that pledge of loyalty.”

Ms Kennedy took the DEFRA last October in a reshuffle after Jeff Rooker stepped down as food and farming minister.

She is the seventh minister to leave the government in the past few days amid poor local and European election results.

A Number 10 spokesman told thePA: “Jane Kennedy has decided to stand down and resign, which happens in reshuffles.”

Ms Kennedy was not offered a job, but made it clear she wanted to leave the Government, he said.

A reshuffle of junior ministers was expected “at some point”, a spokesman added.