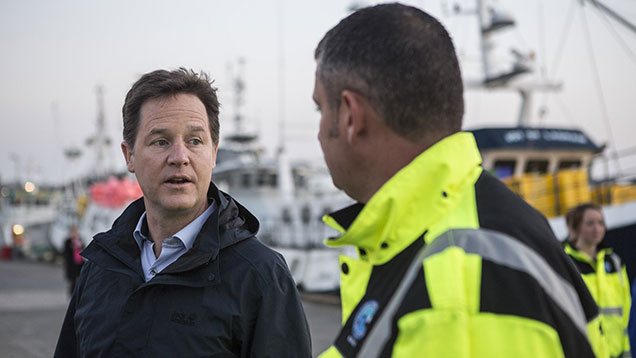 Deputy prime minister and Liberal Democrat leader Nick Clegg says his party is committed to rolling out a “humane and effective” badger cull if elected.

The Lib Dems announced a raft of measures on Tuesday (21 April) aimed at “closing the gap” between urban and rural areas.

The party’s Countryside Charter aims to create more than 300,000 more jobs and ensure people living in rural areas have access to the facilities they need to prosper.

Speaking during a visit to St Austell, Cornwall, on Tuesday (21 April), Mr Clegg told the Western Morning News the Lib Dems “owe it to farmers” to roll out a “humane” and effective badger cull, if the party is still in government after the general election on 7 May.

“We’ve got to look at the evidence and make sure that if a cull makes sense it can only be done in a humane way,” he told the paper.

“We’ve got to look at the evidence and make sure that if a cull makes sense it can only be done in a humane way.”
Nick Clegg, Liberal Democrat leader

“If it’s shown by these pilots that it’s not possible then we won’t continue with the cull.

“But I think we owe it to farming communities and we owe it to the suffering of the cattle, just as much as we owe it to the people who care about the welfare of badgers, to get the balance right. We can only do that by gathering the evidence.”

Launching his party’s Countryside Charter, Mr Clegg pledged to “close the gap” between urban and rural areas in the provision of high-speed broadband so that 99.9% of homes were covered.

Other measures included in the charter to help farming included the publication of a national food strategy, handing more powers to the Groceries Code Adjudicator so that farmers – especially dairy farmers – are paid a fairer price for their products and an animal health disease strategy to mitigate the costs and risks of animal diseases.

“The Liberal Democrats want to unlock this potential so rural areas and the rest of the UK can thrive.”