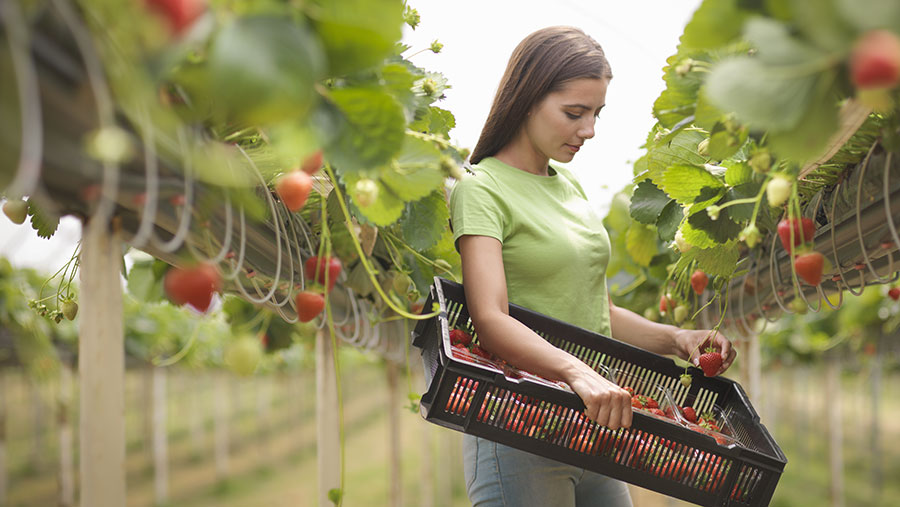 Crops will be left to rot in the fields again this autumn unless the UK government introduces a seasonal agricultural workers scheme, Scottish farmers have warned.

Tonnes of soft fruit has already rotted on farms this season because there is nobody available to harvest it, said NFU Scotland.

It includes 60t of strawberries and raspberries left to rot due to a lack of available staff to pick fruit at Peter Marshall’s West Jordanstone Farm, Alyth, Perthshire.

The union says securing significant numbers of permanent and seasonal non-UK staff to underpin Scotland’s food and farming sectors is a key priority.

But so far the UK government has refused to bow to calls for a seasonal agricultural workers scheme (Saws) so people from overseas can come and work on British farms.

Mr Porter said NFUS had repeatedly raised its concerns regarding the lack of seasonal and permanent labour in the agriculture and food-processing industries.

And he added: “There has been recognition by many politicians and several committees at Westminster of the issue but little action to date.”

Mr Porter said a new Saws for labour from outside the EU was urgently needed.

“The Irish government has already heeded its industry’s concerns about labour shortages and implemented a trial scheme of this sort,” he said.

“A similar trial here would allow its success or otherwise to be assessed and a full scheme made available next year.”

NFU Scotland had evidence from several growers that large amounts of crop have been lost due to a lack of labour available to pick, said Mr Porter.

“Losses for businesses that have been impacted are running in to the hundreds of thousands of pounds,” he warned.

Vegetable and blueberry growers would again be short of workers in the autumn, which would again lead to avoidable crop loss of much-needed home-grown fruit and veg.

Mr Porter said: “This could be addressed by immediately allowing a trial scheme for workers from outside the EU.”

Despite being a relatively small part of Scottish agriculture, soft fruit and field vegetables generate more than 10% of Scotland’s annual agricultural output.

“It is simply unacceptable labour shortages are now threatening the very existence of Scotland’s horticultural industry, which should otherwise be a Scottish agricultural success story.”

On Twitter later, Ms Nokes said the meeting had been “fruitful”.

It was important the government listened to businesses so it could deliver an immigration system which worked in the best interests of the whole of the UK, she added.