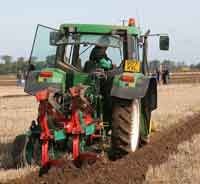 European Commission plans to “green” direct payments as a way to help farmers improve the environment have come under fire from a leading agricultural economist.

Instead steps to combat climate change and improve the environment should be targeted to specific regions, Professor Tangermann told MEPs at a workshop on the future of the Common Agricultural Policy on Monday (7 February).

Rejecting the idea of offering more support to small farms, Professor Tangermann also said direct payments could be made once every five years to provide funds for farms to make on and off-farm investments.

He said support should be more targeted by being drawn up on the basis of how much public good a farm was offering, rather than being based on a payment per hectare.

Professor Tangerman’s criticism of the Commission’s plans to change Pillar 1 funding will be welcomed by DEFRA minister Caroline Spelman, who has argued against greening of the payments.

The suggestion had been broadly welcomed by other European farm leaders during a meeting last month, but Mrs Spelman said targeted payments and developing technologies through Pillar 2 would be more effective.

In a letter to European farm minister Dacion Ciolos, Mrs Spelman also called for “substantial cuts” to the CAP budgets to take into account the difficult economic conditions across Europe.