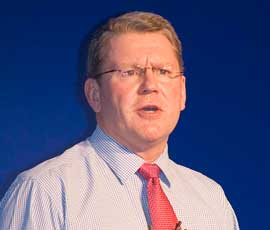 NFU leader Peter Kendall has called on more farmers to back his bid for a fourth term in office – despite standing unopposed for re-election.

Even without a challenger, union rules mean Mr Kendall must secure 75% of the vote to be re-elected because he has already served three consecutive terms as president.

A Farmers Weekly online poll suggests the winning post is certainly in sight. But voting in the election itself will be restricted to members of the 90-strong NFU council.

Mr Kendall said: “The more support I get from council, the stronger the message that we can give to the government, the European Commission, other [pressure groups] and consumers.”

Agriculture was in a better place and more respected as an industry than it was six years ago when he was first elected, Mr Kendall told listeners on Monday (16 January).

But there was no room for complacency. “The way we express ourselves is going to be absolutely fundamental in the coming years,” he warned.

Union rules requiring longstanding presidents to have overwhelming support mean Mr Kendall will have to stand down if he fails to secure 75% of the vote.

The election is due to take place after the NFU annual conference and AGM in Birmingham on Wednesday, 22 February.

The two posts of NFU deputy president and NFU vice president are also up for grabs. Winners will serve from 2012-2014.

They are being contested by eight candidates, including inclumbent deputy president Meurig Raymond and vice president Gwyn Jones, who are both seeking re-election.

Despite rejecting the opportunity to challenge Mr Kendall for the presidency, both men indicated they eventually wanted to lead the union.

Mr Raymond said: “I did say two years ago I would be challenging for the top position. That is still my ambition.”

But issues such as CAP reform and bovine TB meant now was not the right time.

“I have the passion, the drive, the energy and the judgement. It is still my burning ambition to be leader, but now is not the right time.”

Mr Jones said he believed it was important that the NFU top table remained unchanged. But it was “very likely” he would stand for president next time around.

“There is a time for personal ambition and this isn’t it,” said Mr Jones. Now was the time for a good deal on CAP reform and bovine TB and a host of other issues, he added.

Other candidates for the post of deputy president are Kent farmer Kevin Attwood and Yorkshire farmer Paul Temple.

Hustings are taking place across England and Wales from 16-19 January. A full report and profiles of all candidates will appear in Farmers Weekly on Friday (20 January).