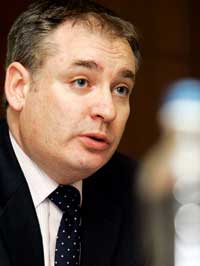 Scotland’s rural affairs secretary Richard Lochhead has made it patently clear that he no longer trusts the UK government to represent the whole country in the forthcoming CAP negotiations.

Mr Lochhead told NFU Scotland’s annual meeting in St Andrews that “DEFRA’s illogical and flawed assumptions” on CAP were a “recipe for disaster for Scottish agriculture”.

“Jim Paice said many good things in his speech, but Caroline Spelman has given us a clear insight into what the UK government is planning,” Mr Lochhead said.

“My real worry is what happens behind closed doors. So I challenge the UK to take the devolved nations into the negotiating room with them in Brussels,” he said.

Mr Lochhead mainly used his speech as a party political broadcast on behalf of the Scottish National Party in the run up to the Holyrood elections in May by listing the assistance given to the farming industry over the past four years.

He also announced a new £2.4m fund to help the development of renewable energy schemes in rural Scotland.

The money will be made available in 2011-12 to farmers and other land managers to help them harness Scotland’s renewable energy potential. The scheme is designed to cover the risk of the planning stage by offering loans of up to 90% of the costs, providing there’s a minimum community benefit from the project.

The rural affairs secretary also announced an £85,000 package to enable around 2000 primary school pupils across Scotland to take part in specially created food and farming education days this year. Twelve schools will receive the funding to help them host special Farmers Market events, building on the success of a scheme launched last year.